The news that Father Donald Henderson has been granted senior status will make Catholics in at least 20 parishes around the Diocese of Peoria fondly recall his time with them.

“I’ve had many, many parish assignments,” acknowledged Father Henderson, 72, who also served on the faculties of Catholic high schools in Peoria and Danville during his 46 years of active priesthood. 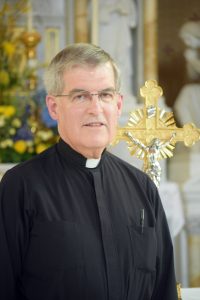 Father Henderson is shown in the sanctuary of Sacred Heart Church in downtown Peoria. (The Catholic Post/Tom Dermody)

“I’ve always tried to be obedient to what the bishop asked,” he said, noting that in most cases he was sent to new assignments to fulfill certain needs at the time.

Serving in both rural and city parishes — including the last year as parochial vicar of three faith communities in the heart of Peoria (St. Mary’s Cathedral, Sacred Heart, and St. Bernard) — has given Father Henderson a rare perspective on Catholic life across the Diocese of Peoria.

“It’s amazing how similar the large and rural parishes are to one another,” he told The Catholic Post in an interview from the offices of Sacred Heart Church in downtown Peoria. While differences in size mean a busier life for priests in larger parishes, the common bond is the celebration of the sacraments — which is where Father Henderson found his greatest joy.

“That is what we were called to do, above all,” said Father Henderson of bringing the life of grace into Catholics from infancy to preparation for death. “To be present, and bring Christ to them,” especially the presence of the Lord in the Eucharist, is “spiritually extremely fulfilling.”

FOUND HIS PLACE IN SEMINARY

A series of tests showed he was more suited to be an attorney, so he transferred to Marquette University in Milwaukee for its pre-law curriculum.

“I didn’t care for that either,” he said. But while at Marquette, the thought of priesthood “became overpowering.” A visit with Msgr. George Carton, then vocation director, led him to enroll at Immaculate Conception Seminary in Conception, Missouri. But even then, uncertainty remained.

“When my parents drove me out I told them, ‘You need to get a motel in the nearby town because tomorrow I may be calling to say ‘pick me up and take me home again,’” he recalled.

Father Henderson never made that call.

“I fell in love with it right away,” he said of the Benedictine-run seminary. “I found a home and the peace that I was looking for.”

He completed his preparation for the priesthood in the exciting, yet uncertain period following the Second Vatican Council and was ordained a priest of the Diocese of Peoria on June 6, 1970.

He served as parochial vicar at St. Mary’s Cathedral, and told Bishop Edward W. O’Rourke he was looking for more work. The bishop said he should become a full-time teacher at nearby Spalding Institute.

“I said ‘Bishop, that’s the one thing I don’t want to do.’” But out of obedience, he applied and “what a blessing it was, because I did not realize how much I would love teaching and especially youth. That really energized me as a young priest.”

He would teach for eight years at Spalding, then serve as chaplain of Schlarman High School in Danville for three years, calling them “some of my happiest days.”

“It’s amazing that something you have no interest in, and don’t think you’d be any good at, the Holy Spirit changes that around and you are led into an area and find it to be wholly fulfilling,” said Father Henderson.

Father Henderson left Schlarman in 1983 and began long service as a parish priest in a variety of assignments.

Father Henderson also served as administrator of St. Mark, Peoria, had a brief stint on the faculty of Peoria Notre Dame High School, and served on the diocese’s presbyteral council.

“The difficulty is you bonded with the people and loved the people,” said Father Henderson of his many moves. “You are just beginning to feel really comfortable in working with them and then you pick up and move to a totally new assignment. It required a lot of adjustments and flexibility.”

There was one contant, however — Father Henderson’s deep prayer life.

He has tried to live and model the self-sacrifice of Christ that flows from the Eucharist, finding special strength in the Liturgy of the Hours so emphasized by the Benedictines in his seminary days.

And that is the advice he passes on to young priests and seminarians.

“Remain focused on Christ,” he said. “Love the celebration of the sacraments and the times of prayer when you are in the presence of the Lord and aware of his presence with you. That benefits you personally and spiritually, but then you’re able to bring that to the people you’re serving so they can love the Lord and desire to serve him better.”

Father Henderson is looking forward to a more relaxed schedule in retirement. He will reside in a rented home on Peoria’s north side.