Deacon Michael Pica never thought he would be called to the priesthood.

“It’s the other guys in the chapel, they’re called,” the transitional deacon remembers thinking in the fall of 2008 when — as a sophomore at Bradley University in Peoria studying health science — Msgr. Brian Brownsey asked him if he had ever considered being a priest.

In truth, Deacon Pica had long wanted to ask a priest what it took to live that life. And by the end of the conversation with Msgr. Brownsey, chaplain of St. Joseph Catholic Newman Center on campus and then diocesan director of vocations, he was “ecstatic” because a door had been opened to the possibility. 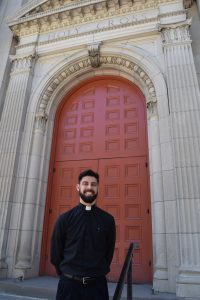 Deacon Pica stands at the entry door of Holy Cross Church in Champaign. He has been a member of the parish since age 9. (The Catholic Post/Tom Dermody)

The question began a discernment process that led the young man who had been raised in Galesburg and Champaign to enter the seminary the following school year.

His journey culminates next Saturday, May 28, when Bishop Daniel R. Jenky, CSC, ordains him to the priesthood during a 10:30 a.m. Mass at St. Mary’s Cathedral in Peoria. Father Stephen Willard, Deacon Pica’s former pastor at Holy Cross Parish in Champaign, will be vesting priest. The public is invited, and a reception will follow in the nearby Spalding Pastoral Center.

Father Pica, 27, will celebrate his first Mass at Holy Cross Church in Champaign — his family’s parish since he was age 9 — at 1:30 p.m. on Sunday, May 29. The homilist will be Father Donald Henderson, a family friend for two decades and “a priest I’ve greatly admired in my life and as I have grown in seminary,” said Deacon Pica.

Born on April 2, 1989, Deacon Pica is the second to the youngest of five sons of Jerry and Jane Pica. When the boys visited their Grandma Pica, she would frequently ask “Who’s going to be the priest?”

“At those moments, I didn’t think it would be me,” said Deacon Pica, who went on to graduate from Champaign’s Centennial High School in 2007. In enrolling at Bradley, his plans were to become a physical therapist like his father, then get married, have children, and “change the world.”

During his freshmen year in college, he went on a Koinonia retreat sponsored by the St. Joseph Catholic Newman Center on campus.

“I really got to know the presence of Christ in the Eucharist and the love that God has for us,” he recalls. “It became so real to me.”

He also learned he was called to holiness. And while holiness can be lived out in many ways, during his sophomore year after speaking with Msgr. Brownsey, he determined the best place to grow in holiness for him would be the seminary.

At the time, he was a resident adviser in a Bradley dormitory. In speaking about the possibility of priesthood with one of his bosses, she told him “Your eyes light up when you talk about it. It’s something you have a passion for.”

“That stuck with me, and gave me a drive to say, yes, this is something I might be called to.”

He has felt support throughout his preparation for the priesthood, first at Immaculate Heart of Mary Seminary in Winona, Minnesota, then during his theology studies at Mount St. Mary’s Seminary in Emmitsburg, Maryland. 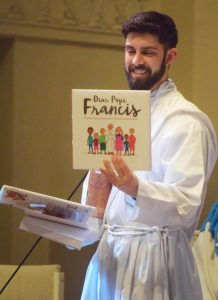 The students of Holy Cross School gave Deacon Pica several books to use in his priestly ministry. (The Catholic Post/Tom Dermody)

In the summers of his seminary years, he assisted at the diocese’s Emmaus Days vocation retreats as well as at parishes in Monmouth, Danville, Moline and East Moline.

And when at home in Champaign, he has been a frequent visitor to Holy Cross School, where the prayer support and pride in him are especially strong.

“We want you to know how really, really proud we are of you and how honored we are that you have chosen this vocation in life,” said Elizabeth Kelley, religion coordinator for grades 6-8, during a presentation of cards and gifts to Deacon Pica at the close of an all-school Mass on May 13. “We have a very special place in our hearts for you,” she added, emphasizing the prayers will continue long after his ordination day.

Deacon Pica also credited several priests for their support and example, including Father Antonio Dittmer, his college seminary spiritual director.  He cited Father Willard’s generosity, saying “the example of his life and the love which he gives to everyone is incredible.” And of Father Henderson, Deacon Pica said “he’s a very holy priest and I pray I may serve the people of God as he has.”

Deacon Pica said he is looking forward to the moment of ordination and then celebrating Mass with Bishop Jenky. “That’s going to be incredible,” he said, marveling at what it will be like to “enter into what is going on, the reality of being ordained a priest of Jesus Christ.”