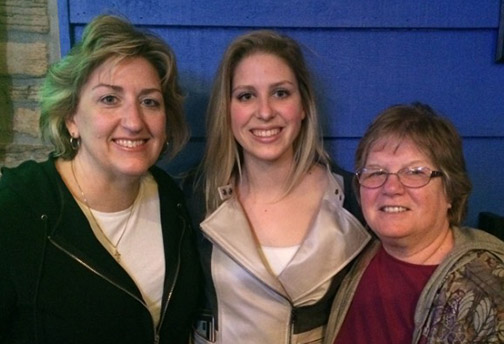 MILAN — It is not unusual for several members of the same family to experience Cursillo over time. For three generations to make the same Cursillo weekend is a different story, however.

That’s what the women of the Kilcoin family of Milan and Matherville did this spring at the Believers Together Center in Moline. It left them at peace and refocused in a way they didn’t expect — and for which they will always be grateful.

They had the age spectrum covered, with Sydney, 20, being the youngest, and Kathleen, 71, being the senior member of the group.

Chris was the one who got the ball rolling.

Cursillo is a Spanish word, which means, “short course.” Cursillo in Christianity is a three-day renewal experience, sponsored by the Catholic Church, that is designed to bring Christians to a greater knowledge and love of the Lord, and to a deeper level of commitment to their faith.

When she heard about Cursillo, Chris thought it would be a good way for her and her husband, Rick, to prepare for their soon-to-be “empty nest.” In addition to Sydney, the Kilcoins have two sons, Aidan and Liam, who are seniors in high school.

“I didn’t know a lot about it,” she admitted, but said, “I knew there’d be ways to volunteer. You’d meet a whole group of people involved with the church and we could have a whole new social group.”

Because husbands are required to attend a Cursillo weekend first, they started looking for ways to work that into Rick’s work schedule and the fall sports schedule at school. In the midst of everything, Chris had a medical emergency and Rick lost his father and uncle.

“I needed Cursillo more than ever,” Chris told The Catholic Post. “It wasn’t the time to go in November. It’s like God’s got this planned out to go now, because it was just a rollercoaster of emotions with everything going on. . . . The highs and lows of life.”

Rick was able to be part of Cursillo No. 1101 and liked it so much that he told Sydney she should go. Then he called his mother.

“He said, ‘I’ve already got the papers filled out and I’m going to drop them off,’” Kathleen recalled with a laugh.

“He just told us we would really like it,” Chris said.

While Rick sponsored his mother and daughter, Chris was sponsored by Sheila Herman, a friend who leads her Bible study at the Andalusia church. That brought everything full circle, since Sheila’s husband, Marty, had sponsored Rick.

The weekend — they were part of Cursillo No. 1105 — allowed the women to give up the busy-ness of the outside world, take a deep breath and find some calm. Chris said they appreciated the way the Cursillo team took care of them.

Rick added that support came in another form.

“You don’t realize how people are praying for you,” he said.

Chris noted that the Cursillo experience helped them to refocus their lives and embrace what’s really important.

They brought their newfound enthusiasm to St. Mary’s Cathedral in Peoria for the Chrism Mass, traveling by bus with other Catholics from Andalusia and Milan.

Chris added that she’s excited to see how their new outlook will affect their family life.

“Hopefully it will keep our focus in the right place,” she said.