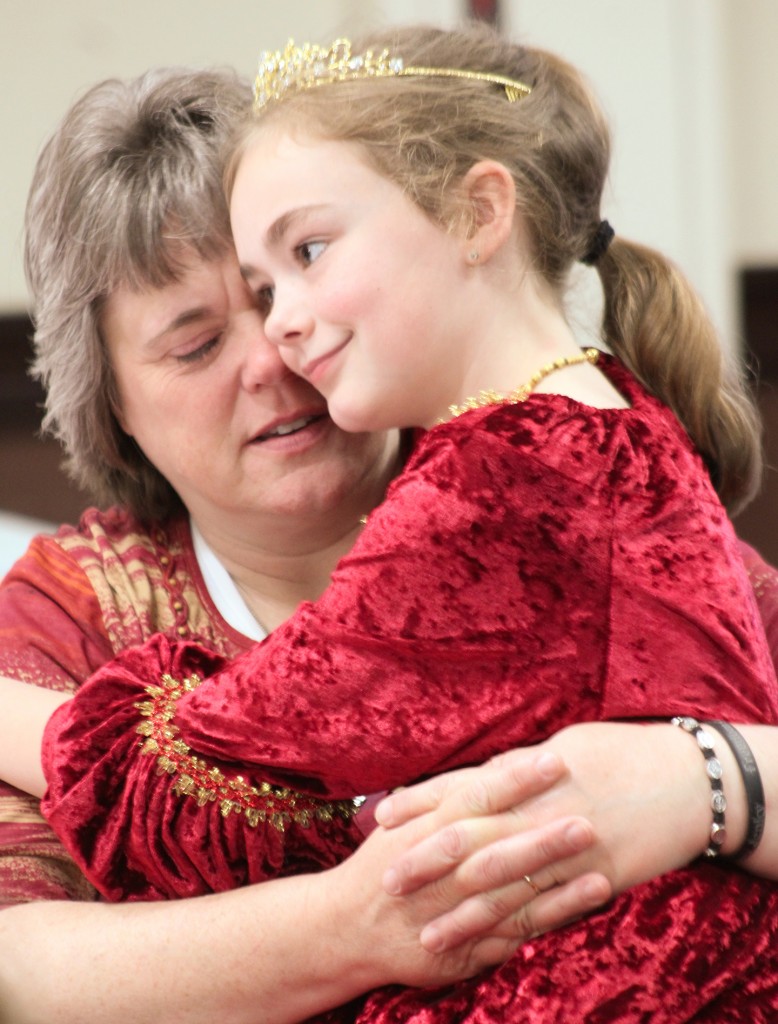 Tea, finger sandwiches and cookies were served with smiles and some serious talk last Saturday as a roomful of “Jesus princesses” learned why their dignity as daughters of God should be respected and safeguarded.

The Mother-Daughter Fertility Appreciation Tea brought the girls and their mothers, godmothers, grandmothers and “aunties” to the Spalding Pastoral Center in Peoria. Sponsored by the Respect Life Ministry of the Diocese of Peoria and OSF HealthCare, the event was designed to give girls between the ages of 10 and 13 more information about what would be happening to their bodies as they mature and why preserving their God-given dignity is so important. 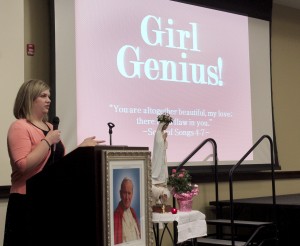 “Because God created the body he had a plan for everything the body does,” said Shirley Plaag, who directs the diocesan Office of Evangelization and Faith Formation. (The Catholic Post/Jennifer Willems)

The science and health aspects of the morning were handled by Dr. Jillian Stalling, an obstetrician and gynecologist who is associated with Teverbaugh, Croland and Mueller and works with OSF HealthCare to develop natural family planning services and NaPro Technology. Shirley Plaag, who directs the diocesan Office of Evangelization and Faith Formation, spoke to them about “God’s genius plan” for each one of them.

Before they left, the girls and the special women in their lives had an opportunity to venerate a first-class relic of St. John Paul II, who developed the “theology of the body.”

Sometimes people try to separate God from discussions about the body because God wouldn’t have anything to do with something like that, but nothing could be further from the truth, Plaag told her young listeners.

“Because God created the body he had a plan for everything that the body does,” she said. “All of its systems and everything your body will do in your life, that was God’s plan and it was his genius plan.”

That is what the “theology of the body” is all about, she explained.

Plaag encouraged them to respect their bodies and be grateful for them the way God made them, without trying to change the way they work. She added that this respect is necessary and good when dealing with their “sisters in Christ.”

“If there’s somebody who looks different from you and your friends maybe call that ugly, stand up for that person and encourage them,” she said. “Don’t take the beauty that God’s given us and compare it to other girls. . . . All of your friends — and even the ones you don’t know — are still your sisters in Jesus, because we’re all part of that Body of Christ.” 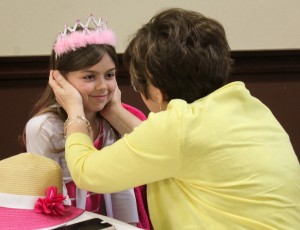 Sue Hawk looks on her goddaughter Isabelle Adams with love after the girl was crowned a “Jesus princess” at the April 30 event. They are from St. Mary Parish in Metamora. (The Catholic Post/Jennifer Willems)

Dressing modestly is a good way to show respect for their bodies and this “veiling” can help them to remain pure until they marry and share this gift with their husbands.

She held up Mary as someone who knew her dignity as a woman and rejoiced in her body and the way God had created it. And God worked with the way he made her to bring about our salvation as the mother of Jesus, according to Plaag.

“Just think what would have happened if Mary had rebelled against the gift of her feminine body,” she said.

“God has a genius plan for each one of you young ladies,” Plaag said. “Every girl that was ever created was called to be a mom and a spouse.”

For some that means marriage and family. For others, like women religious, that means being the spouse of Jesus and the mother of many spiritual children.

Being daughters of their heavenly Father, who is King of all, makes them princesses, Plaag said. Each mother received a crown to place on her daughter’s head to make them “Jesus princesses.”

“God made you very special and one of a kind,” Dr. Stalling added during her presentation about the biology of becoming a woman. “Even though we are all girls, we all have unique qualities, unique gifts that God gave us. As women we have a unique way we can bring that about to the world.”

She gave them a few minutes so the mothers could share with their daughters what special gifts and qualities they bring to the family. Then she asked the girls to tell their mothers, grandmothers and godmothers what they admire about them.

She had an opportunity to do that, too, since she brought two of her daughters, Ann Marie, 10, and Katelyn, 11, with her.

There was also “homework” for the trip home. Dr. Stalling asked the mothers to tell their daughters the story of their birth or, if they were adopted, what it was like the first day.