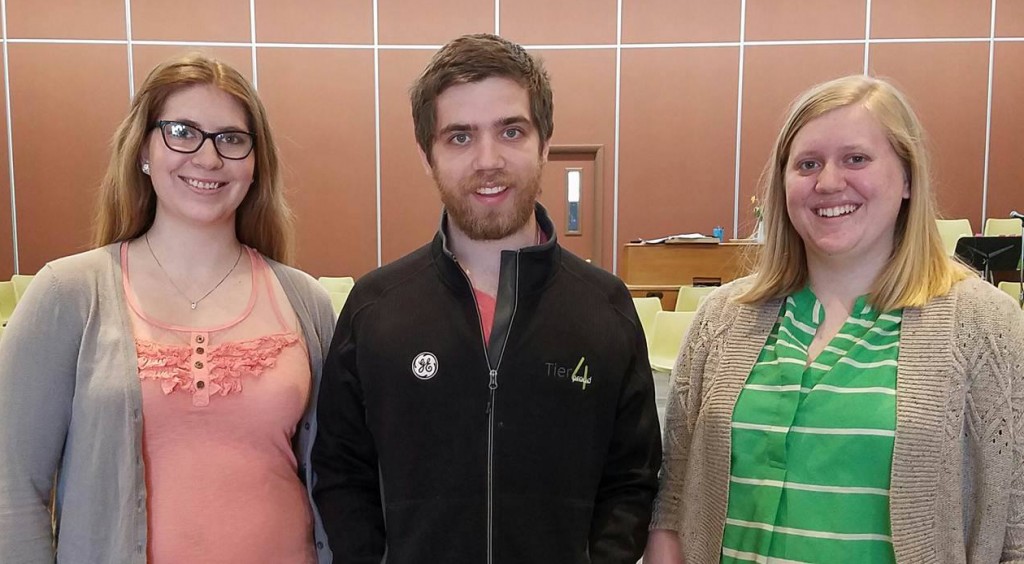 Sophie Peterson, Joe Hoerdeman and Maggie Wallace are students from the St. Francis of Assisi Catholic Newman Center at Western Illinois University who are completing a year of teaching CCD at St. Bernard Parish in Bushnell. (Provided photo)

BUSHNELL — When St. Bernard Parish here switched from a home-based faith formation program to a classroom setting for religious education a year ago, Father Dominic Vitaliano turned to college students at Western Illinois University in Macomb to help fill a need for teachers.

It turned out to be a winning idea, not only for the children from this rural parish but for their student teachers as well.

“CCD is something I’ve always thought about teaching,” said Sophie Peterson, one of three students who answered the invitation last spring at the St. Francis of Assisi Catholic Newman Center on campus, where Father Vitaliano is chaplain. 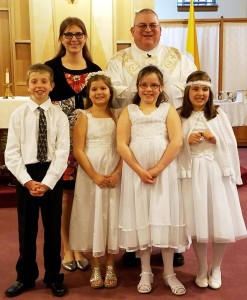 Peterson, a junior music therapy major at Western, realized the first fruits of her year of teaching on April 10 when the four second-graders she has worked with since September received their First Communion at a packed St. Bernard Church.

“I was really proud of them,” said Peterson, a native of Oquawka. She was assisted in preparing the class for the sacraments of reconciliation and Eucharist by the mother of one of the students.

“This was a fun age group to teach,” said Peterson. “They’re open to learning about everything.”

Joining her as student teachers this year were Joe Hoerdeman, a senior engineering technology major from Peoria, and Maggie Wallace, a junior pursuing a degree in English education who jumped at the opportunity to lead a class.

“I thought it would be a great experience,” said Wallace, citing reasons beyond her love of teaching. Wallace told The Catholic Post she became Catholic at age 16 in her hometown of Sugar Grove, and while she learned much about the faith in that process, teaching it to seventh- and eighth-graders “forced me to look into things I hadn’t even thought of looking into.”

Three of her students had already received the sacrament of confirmation, while three others are preparing to be confirmed next spring.

“It was a cool mix,” said Wallace. “They helped each other” as the class delved into Scripture and learned about the gifts of the Holy Spirit.

The three college students, meanwhile, helped one another with rides from the Macomb campus to Bushnell each Sunday morning.

“It’s quite a sacrifice for them to come over here,” said Father Vitaliano, who is completing his third year guiding St. Bernard Parish. “It’s a 34-mile roundtrip.”

The student teachers arrive at 8:45 a.m. on Sundays and are with their classes until the parish’s 10 a.m. Mass. They return to Western Illinois University and take part in the 5 p.m. Mass at the Newman Center, where  Peterson and Wallace are active in music ministry.

Hoerdeman and Wallace have an added incentive to ride together. They are engaged to be married next June at St. Mary’s Cathedral in Peoria.

Hoerdeman encouraged others who might be asked to teach CCD in parishes around the diocese to consider it, even if they — like him last fall — have no experience as teachers.

“It becomes easier as you grow in your own faith to talk about the faith,” said Hoerdeman, who taught fifth- and sixth-graders on topics ranging from the corporal and spiritual works of mercy to the sacraments.

The joy, he said, comes from “being able to bring children closer to Christ.”

Father Vitaliano and Laura Barden-Gabbei — one of three who coordinate religious education at the parish — said they hope the success of the student teachers will motivate parents and others to become teachers as well.

“It was my prayer this would charge up parishioners to step forward and say ‘This is important that we pass on the faith to these kids,’” said Father Vitaliano.

Barden-Gabbei praised the commitment and enthusiasm of the college students, and said their witness may also inspire the parish’s high school students to continue to be active in their faith when they go away to college.

“They are great role models,” said Barden-Gabbei of the Newman Center students. “They understand their faith, and want to share it.”