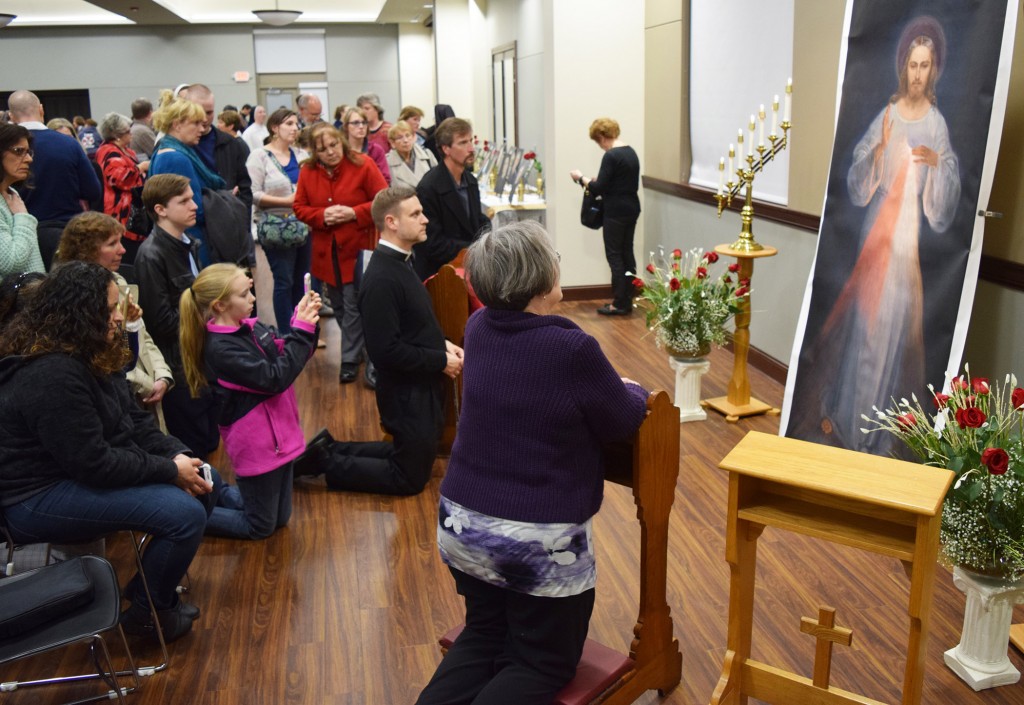 After viewing "The Original Image of Divine Mercy" documentary at St. Jude Parish in Peoria on March 19, more than 250 Catholics had an opportunity to photograph and venerate a six-foot replica and relic of the painting brought to the showing by director Daniel DiSilva. (The Catholic Post/Tom Dermody)

The image of Jesus affiliated with Divine Mercy devotion has been reproduced countless times, but there had to be an original.

Tracing the remarkable journey of that original painting from its creation based on the visions of St. Maria Faustina Kowalska of Poland in the 1930s to its present location at a shrine in Lithuania is the focus of a new documentary that drew an audience of nearly 300 to Hettinger Hall at St. Jude Parish in Peoria on March 19.

That weekend, the new film — “The Original Image of Divine Mercy” — was shown in 70 theaters, but its writer and director was at the Peoria showing. He brought with him a six-foot, computer generated replica of the original image. 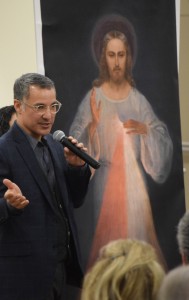 Daniel diSilva explains to an audience at St. Jude Parish in Peoria how a replica of the original image of Jesus as the Divine Mercy, given to him by the Archdiocese of Vilnius in Lithuania, was created using a computer scanning process. (The Catholic Post/Tom Dermody)

“What the original canvas has been through makes it miraculous,” said Daniel diSilva in comments before the film was shown on two large screens in the parish hall. “In telling the story, you begin to realize what a special canvas this is.”

The original image was painted over the course of six months in 1934 in Vilnius, Lithuania, by artist Eugeniusz Kazimirowski, who had been introduced to St. Faustina by her confessor, Father Michal Sopocko. St. Faustina reportedly oversaw every detail of the painting to ensure it corresponded as closely as possible to the vision of Jesus she had as the Divine Mercy, including pale red and white rays emanating from Jesus’ heart.

After an initial public display in 1935, the painting began a journey reflecting the turbulent times of World War II Europe and the Soviet expansion. Because of persecution of Catholics and later indifference, it was hidden in convents and attics, smuggled across borders with a bottle of vodka to appease guards, and left for 16 years in an abandoned church before being restored and hung above the altar at a church in Vilnius.

“Nobody has cared about this painting,” said diSilva. “Hopefully with this movie and other things happening people will start to care about it.”

“A POINT OF ENTRY” INTO GOD’S GRACE

DiSilva acknowledged to the Peoria audience that “we did a film about a canvas, we didn’t do a film about a devotion.” Yet the documentary, produced by Springtime Productions, includes frequent excerpts from St. Faustina’s diary, and faith permeates the discussion. One repeated message is that the non-traditional painting is “a point of entry” into the indescribable grace of God’s mercy.

Film to be shown in Savoy and again in Peoria

The one-time showing, scheduled for the day before Divine Mercy Sunday, is being sponsored by members of the Divine Mercy Cenacle prayer group of Champaign-Urbana. A cash donation of $10 will be accepted at the door to cover the costs of licensing the film and renting the theater. No advance tickets will be sold.

As the Divine Mercy message and devotional practices spread in the late 20th century — St. Faustina was canonized by Pope John Paul II as the first saint of the new millennium — reproduced copies of the painting spread throughout the world. One popularly used image was created by artist Adolf Hyla, who gave his version to the Sisters of Our Lady of Mercy in Poland in thanksgiving for the preservation of himself and his family during World War II.

There are differences in the images, including the gaze of Jesus — downward in the original, as if Jesus was looking down from the cross, but forward in Hyla’s rendition — the height of Jesus’ hand in blessing, and the vibrancy of the rays.

DiSilva said “the movie wasn’t made to offend anybody, just to have the truth be told.” There’s nothing wrong with the other images, he said, which are trying to express the same devotion.

The replica diSilva brought to Peoria was given him by the Archdiocese of Vilnius. It was produced by a computer scan of the original and “there is no replica as good as this,” he assured.

Following the viewing of the film, many in attendance prayed before the image, considered a third class relic because it has been touched to the original. Some touched rosaries, holy cards or photographs to the image.

Jody Pitcher of St. Mary Parish in Kickapoo touched her wedding ring to the image.

“The movie made the image a lot more real to me,” she told The Catholic Post. In describing details she had taken for granted, “it made sense to me.”

The documentary was brought to Peoria by Marsha Kampfl. In addition to supporting diSilva’s efforts to have a visitor’s center built near the shrine in Vilnius, proceeds also benefited the Women’s Care Center in Peoria.

Additional showings, without diSilva’s presence or the replica of the image, are planned in Peoria and Savoy as Divine Mercy Sunday approaches on April 3. (See inset box.)  For more information on the film, or to watch a trailer, visit divinemercyfilm.com.