A new documentary film exploring “The Original Image of Divine Mercy” will be shown at two Peoria locations, with director Daniel diSilva in attendance and a six-foot replica and Class 3 relic of the image, blessed by Pope Francis, on display during a showing on March 19. 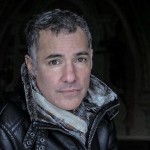 The full-length film, which traces diSilva’s yearlong search across Europe for information on St. Faustina’s original painting of Jesus as he appeared to her in a vision in 1931, will be shown at the following times and locations:

Saturday, March 19, 7 p.m. at St. Jude Church and Hall, 10811 N. Knoxville Ave., Peoria. Check-in and a reception with diSilva begins at 6 p.m. with time for veneration and discussion. Original artwork will also be on display. Refreshments will be served. This will be a director’s cut of the movie, approximately 2.5 hours in length. Cost is $15 per person.

Seating is limited. Reservations may be made by emailing avemaria927@yahoo.com or by calling Marsha Kampfl at (309) 370-2122.

Kampfl, who has brought other faith-based films to the area, is an associate board member at the Women’s Care Center in Peoria. Proceeds from the showings of the film will support that pro-life ministry.

Billed as an “extraordinary film for an extraordinary Year of Mercy,” the Springtime Productions documentary was written and directed by diSilva, a Catholic from San Diego who is an account executive for a Hollywood-based public relations and marketing firm specializing in film and live productions.

A trailer of “The Original Image of Divine Mercy” and further information on the documentary is found at divinemercyfilm.com.