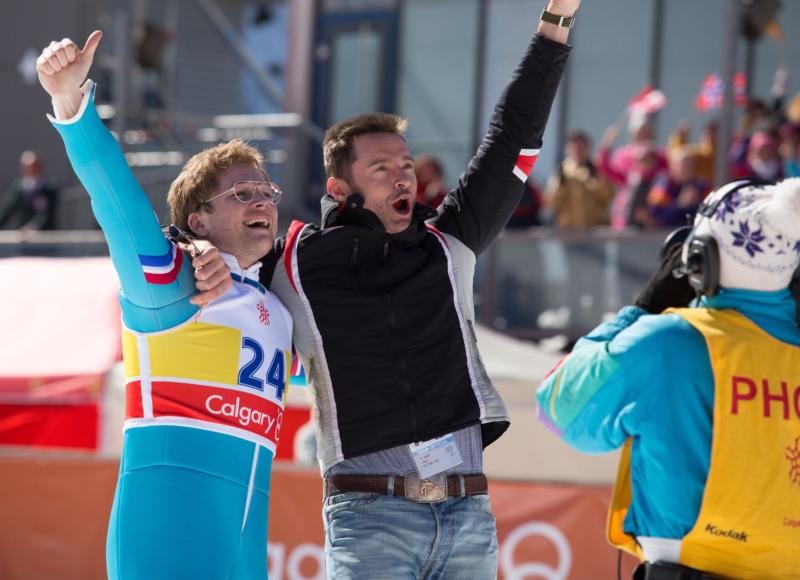 Taron Egerton and Hugh Jackman star in a scene from the movie "Eddie the Eagle." The Catholic News Service classification is A-III -- adults. (CNS/Twentieth Century Fox)

Generally uplifting fact-based drama in which a working-class English lad (Taron Egerton) aspires to become an Olympic athlete. The barriers standing in his way include a childhood disability, a near-total lack of natural talent, the dyed-in-the-wool snobbery of the British sports establishment and the firm opposition of his practical-minded father (Keith Allen). Yet, with the encouragement of his nurturing mom (Jo Hartley), and the initially reluctant mentoring of a washed-up competitor (Hugh Jackman) who frittered away his own chance for glory, the awkward but determined protagonist trains as a ski jumper.

Director Dexter Fletcher’s inspiring tale of triumph over the odds, which also sees Jackman’s character working to redeem himself, ought to be perfect for teens. But the inclusion of some sexual humor — playing, ironically, on the main character’s innocence of such matters — will lower its score with parents. Partial male nudity in a sauna, comic references to sexuality, at least one use of profanity and a couple of crass terms.