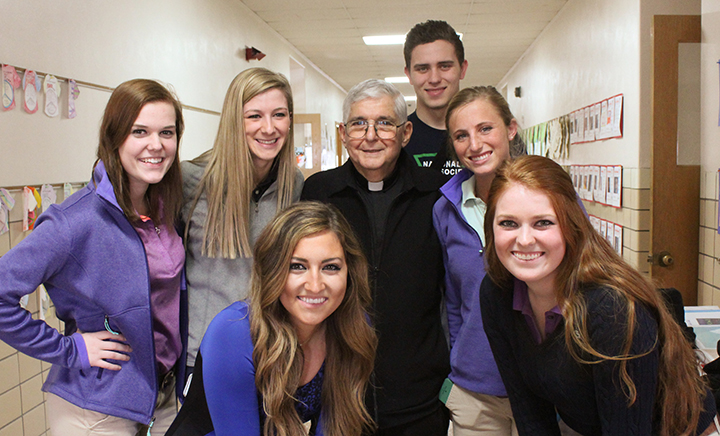 ROCK ISLAND — In many ways the ministry of Viatorian Father Daniel Mirabelli is like the sugar maple tree that was planted to mark his 50th anniversary at Alleman High School: sturdy, dependable, full of color and life, and capable of great things.

The tree, which sits at the front of the school building, replaces one that came down in a storm. A plaque noting his years of service at Alleman sits at the base.

“Father Mirabelli is the backbone of Alleman High School and has been for 50 years,” said David Hobin, principal. “He has done so much for Alleman and there is no way we can ever thank him enough.” 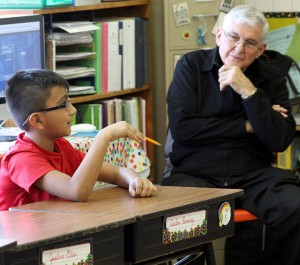 “There is something unique about Alleman. It’s an attitude that no matter who you are, you’re important to us.” — Father Daniel Mirabelli, CSV

That might be a problem if Father Mirabelli were in it for the thanks. His greatest joy, however, has nothing to do with his accomplishments. He’d rather talk about the students, teachers and staff of Alleman and the pastors who have supported the school over the years.

“There is something unique about Alleman. It’s an attitude that no matter who you are, you’re important to us,” he recently told The Catholic Post.

He credited Father John O’Connor with establishing that foundation of respect and dignity from the earliest days of the school and said that is still key to Alleman’s success.

“There’s no harassing, no bullying,” Father Mirabelli said. “It’s the idea of the love of God, the love of Jesus for all people. No matter who it was, he always showed love for them.”

He also has taken his philosophy of education from the Good Shepherd, striving “to teach as Jesus taught. That’s what the Viatorians taught me.”

And that’s what he has imparted to many of the school and community leaders in the Quad Cities, including Jane Barrett, principal at Seton Catholic School in Moline. She attended Alleman and is happy to be known as one of his “Alleman girls.”

What makes him special is “his devotion to the kids, number one, and their families and the Catholic faith,” she said. “When you’re not sure what’s going on, you look to him and his dedication and what he has done for Catholic education here in the Quad Cities. He’s had a huge effect on what we do here at Seton.”

During Catholic Schools Week, Father Mirabelli accompanied the Alleman Ambassadors to Seton Catholic and it was hard to tell who was having a better time — the grade school students, the high school students or the priest.

“He puts the kids first. It’s always about the kids,” Barrett said.

“ALLEMAN IS MY LIFE”

Born in Chicago, Father Mirabelli attended Fenwick High School in Oak Park. It was a Dominican school, but there were three Viatorians on staff and they left a lasting impression.

When he graduated, 13 members of his class entered the priesthood. Eleven became Dominicans and he joined the Clerics of St. Viator with another classmate. 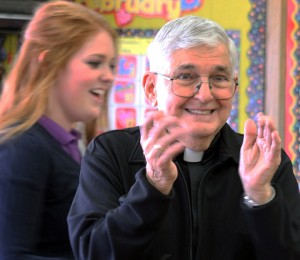 He was ordained to the priesthood on May 28, 1960, by Bishop Martin McNamara of Joliet in the Cathedral of St. Raymond.

Father Mirabelli taught for one year at St. Benedict High School in Chicago and for five years at St. Viator High School in Arlington Heights before going to Alleman in 1966.

“I came as the business manager and to take care of tickets and the bookstore. After two years I was supposed to go back to Chicago,” he said, but couldn’t. “I just fell in love with the place and they said, ‘OK, Dan, you can stay.’”

His religious community would approach him one more time about returning to the Chicago area and then asked him to consider ministry with the Viatorian community in Las Vegas. They don’t ask anymore.

In his years at Alleman Father Mirabelli has taught Latin, English, history and sociology. In 1990, he was asked to become director of development and even though he loved being in the classroom, he agreed.

While people have asked him when he’s going to retire, he doesn’t entertain the notion.

“They’re going to carry me out in a box,” Father Mirabelli says with a laugh. “As long as the good Lord gives me health and I’m not a burden, Alleman is my life. It always has been.”