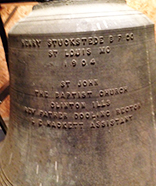 The 2,000-pound bronze bell cast in 1904 for St. John the Baptist Church in Clinton bears the names of founding pastor Father Michael Dooling and his assistant, Father Hackett.

CLINTON — Adding to the joy of Christmas at St. John the Baptist Church here will be the sounds of bells, including a 111-year-old, 2,000-pound cast bronze one original to the construction of the church.

The historic bell has friends — parishioners for whom its deep, rich tone stirs memories of parish life across the generations, as well as new “neighbors” in the form of a digital carillon.

Last summer, the parish worked with the Verdin Company of Cincinnati to take care of some aging issues affecting the mechanical parts and the support frame for the four-foot wide bell. The work included installing a chain and motor to ring the big bell rather to eliminate the need of having someone present to pull a long rope — and perhaps be lifted off the ground.

“I’m a big proponent of the Angelus,” said Father Jim Henning, OFM Conv., pastor, referring to the Catholic devotion commemorating the Incarnation that traditionally takes place three times daily. The church bell is used as a call to prayer, and the bell forged by the Henry Stuckstede Company in 1904 bellows that call far from the steeple at 502 N. Monroe.

“It’s up high and the sound really travels,” said Father Jim, noting the original bell also rings as a call to worship five minutes before each Mass.

CARILLON PLAYS REQUESTS
The addition of the digital carillon has expanded the sound possibilities to include thousands of songs. And the parish is taking requests.

Invitations to dedicate a song played on the carillon are placed in the parish bulletin. A $10 per song donation helps to pay the insurance and maintenance costs of the new bell system.

Dedications have been made for birthdays, wedding anniversaries, and more. Patriotic songs were requested, for example, on Veterans Day and the Fourth of July.

What might Clinton residents expect to hear on Christmas Day?

“Any Christmas carol you can think of,” said Father Jim, listing “Adeste Fidelis,” “Silent Night,” and a personal favorite, “Go Tell It on the Mountain” as possibilities.