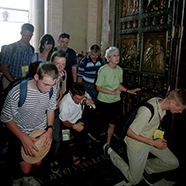 Photo Caption: The opportunity to pass through the Holy Door at St. Peter’s Basilica (shown in a Jubilee Year 2000 file photo) and at other papal basilicas will be a highlight of the Oct. 21-27, 2016 trip.

Readers of The Catholic Post — and all interested persons — are invited to make a pilgrimage to Rome an unforgettable, grace-filled part of their observance of the Holy Year of Mercy.

The Catholic Post, in conjunction with the Collette travel company, is offering a seven-day trip to Rome and the Vatican Oct. 21-27, 2016, just one month before the closing of the extraordinary jubilee year proclaimed by Pope Francis.

Msgr. Dale Wellman, spiritual adviser of the Diocesan Council of Catholic Women for more than four decades and newly appointed episcopal vicar for senior priests, will be the tour’s spiritual director. Representing The Catholic Post and serving as pilgrimage photographer will be Jennifer Willems, assistant editor.

The itinerary is highlighted by two likely encounters with Pope Francis — at his Sunday Angelus on Oct. 23 and his Wednesday general audience three days later.

Participants will also have the opportunity to pass through the Holy Door at St. Peter’s Basilica — which will be opened Dec. 8 by Pope Francis to signal the start of the Year of Mercy — as well as jubilee doors at other papal basilicas including St. John Lateran, St. Paul Outside the Walls, and St. Mary Major.

“The Holy Door will become a Door of Mercy through which anyone who enters will experience the love of God who consoles, pardons, and instills hope,” wrote Pope Francis in “The Face of Mercy,” his announcement of the jubilee.

In that document, the pope said the practice of pilgrimage — whether to Rome or local sites — “has a special place in the Holy Year, because it represents the journey each of us makes in this life. May pilgrimage be an impetus to conversion: by crossing the threshold of the Holy Door, we will find the strength to embrace God’s mercy and dedicate ourselves to being merciful with others as the Father has been with us.”

Pilgrims to Holy Doors may obtain an indulgence granted by Pope Francis for the Extraordinary Jubilee of Mercy when the visit is linked with the sacrament of reconciliation and other requirements.

GUIDED TOURS OF ROME SITES
n addition to its spiritual components, including several Masses, the time in Rome will offer guided tours of Classical Rome — featuring the Piazza Venezia, the Roman Forum, Circus Maximus and an in-depth visit to the Colosseum — the Vatican Museums, the Sistine Chapel, and the papal basilicas.

Tuesday is kept open for shopping, exploration of the city, relaxation, or participation in an optional cooking class.

Cost is $3,779 and includes airfare from Chicago (as well as roundtrip bus transportation from Peoria to Chicago), accommodations at the Hotel dei Borgia in Rome, and eight meals (five breakfasts and three dinners, including wine).

To request a promotional flier or for further information, contact The Catholic Post at (800) 340-5630 or cathpost@cdop.org. Pilgrimage planning is continuing, and updates will be published in future issues of The Catholic Post and on our website, thecatholicpost.com.