John the Baptist’s call for repentance is still relevant, urgent 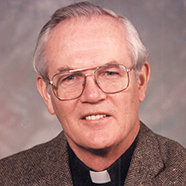 All four Gospels start their accounts of the beginning of Jesus’ public ministry by describing John the Baptist preparing the way of the Lord. In this Sunday’s Gospel, Luke begins his story with a wide lens by naming the people in authority, both in civil and religious settings. He is historically setting the time of an event, namely the preaching of the prophet John the Baptist as he proclaims, “Prepare the way of the Lord, make his paths straight!” He was proclaiming a baptism of repentance for the forgiveness of sins.

Note that the Word of God does not come through the expected spokespersons, i.e., those in authority, but to an obscure prophet living in the desert, a place of purification and inner scrutiny — far from the palaces and temples of the powerful.

In his call to repentance, John quotes the words from the prophet known as Second Isaiah (Isaiah 40:3-5): “Every valley will be filled in, every mountain and hill shall be made low, the rugged land shall be made a plain, the rough country a broad valley.” The original setting for these words was the Babylonian Exile. It was a message to comfort the exiles with the assurance that God would restore them to the promised land.

In the Book of Isaiah the “Lord” for whom the way is being prepared is God, but in the Gospel of Luke the “Lord” is Jesus. By reinterpreting the words from Isaiah, Luke is teaching that Jesus is God.

HOW DO WE PREPARE?
The Gospel call to repentance finds an echo in this fanciful story:

“One day, she saw a small boy playing by a fountain. A man rode up on horseback and dismounted to get a drink of water. The man saw the child’s face and suddenly remembered his long-lost boyhood innocence. Then, looking in the fountain and seeing the reflection of his hardened face, he realized what he had done with his life. Tears of repentance welled up in his eyes and began to trickle down his cheeks. The woman took one of those tears with her back to heaven. She was welcomed back with joy and love.”

We prepare the way of the Lord by seeking forgiveness for our sins. Come Lord Jesus!

FATHER TOM KELLY, a former pastor in Ottawa and Bartonville and chaplain at the Newman Foundations at the University of Illinois in Champaign and Bradley University in Peoria, is a senior priest of the Diocese of Peoria. He resides in Peoria.