Giving thanks: Harvest Mass offered in a barn near Odell 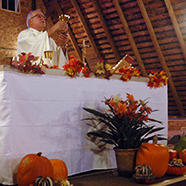 ODELL — Thanksgiving is not a “one-day thing,” reminded Father David Sabel, principal celebrant of a regional Harvest Mass on Nov. 11 that drew representatives from six area parishes to a barn southeast of this Livingston County community.

“Make giving God thanks a habit,” said Father Sabel, vicar of the Pontiac vicariate, in his homily. As Thanksgiving Day (Nov. 26) leads into the First Sunday of Advent (Nov. 29), Father Sabel encouraged those who packed the barn’s upper floor as a windstorm raged outside to compile a written list of things for which they are grateful.

Father Sabel — who is pastor of parishes in Pontiac, Flanagan, Cullom, and Odell — made several references to the popular book “One Thousand Gifts” by Ann Voskamp, in which the author recounts how thankfulness to God changed her life.

“We have an amazing amount of things to be thankful for,” said Father Sabel. “If your list doesn’t reach 1,000, oh well.” The important thing, he said, is to follow the example of the cured leper in the day’s Gospel reading who returned to thank Jesus.

Prayers of gratitude at the Mass were voiced not only for a successful harvest, but — because it was celebrated on Veterans Day — for the sacrifices of those in the military.

“Life isn’t always easy,” said Father Sabel, who was assisted at Mass by Father Adam Cesarek. “As farmers you know that. There are dry periods, sometimes too much rain. But the bottom line is you are blessed to be a farmer, blessed to have beautiful people around you as farmers and neighbors.”

The refurbished barn belongs to Jim and Sharon Stahler. The liturgy was one of at least four regional Harvest Masses celebrated in the diocese this fall at the encouragement of Msgr. Thomas Mack, episcopal vicar for rural life. Msgr. Mack celebrated a Harvest Mass at Sacred Heart, Abingdon, while others were offered at St. John the Baptist, Rapids City, and St. Mary’s, El Paso.

A simple meal was served following the Mass in Odell.