Faustina drama is coming to Galesburg, LaSalle and Carthage 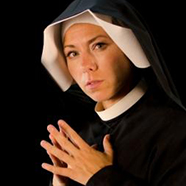 Photo Caption: Actress Maria Vargo is shown in a scene from “Faustina: Messenger of Divine Mercy,” coming to the Diocese of Peoria Nov. 17, 19 and 21.

Parishes in Galesburg, LaSalle and Hancock County are helping people prepare for the upcoming Holy Year of Mercy by hosting “Faustina: Messenger of Divine Mercy.” The one-woman drama features actress Maria Vargo, who was born in St. Louis and is now based in Hollywood.

Presented by Saint Luke Productions, the play runs for 90 minutes and is performed without intermission. For this reason, it is said to be suitable for anyone 13 and older.

“Faustina” will be performed Tuesday, Nov. 17, at 6:30 p.m., in Costa Catholic Academy’s Brophy Auditorium, 2726 Costa Drive, Galesburg. This performance is being sponsored by the Institute of Charity (Rosminians), the community that serves Corpus Christi and St. Patrick in Galesburg, Sacred Heart in Abingdon, and St. Matthew in Farmington.

The LaSalle Catholic Parishes will host “Faustina” on Thursday, Nov. 19. It will be performed at 7 p.m. in St. Patrick Church, 725 Fourth St.

On Saturday, Nov. 21, “Faustina” will be presented at 7 p.m. in the CSC Auditorium of the Charger Center, 1160 Buchanan, Carthage. Prior to the show, Mass will be celebrated at 4 p.m. at Immaculate Conception Church, 125 N. Fayette St., and a baked potato bar will be prepared by the parish’s Women’s Club.

There is no admission, but a free-will offering will be accepted.

DECLARED A SAINT IN 2000
“Faustina: Messenger of Divine Mercy” tells the story of Helena Kowalska, who was born in 1905 into a peasant family in Poland. She would enter the Sisters of Our Lady of Mercy in Warsaw and take the name of Sister Maria Faustina.
In 1930, she started having mystical visions of Jesus in a white garment, with rays of light coming from his heart. He asked her to paint his image with the message, “Jesus, I trust in You,” across the bottom.

He also entrusted a special prayer, the Divine Mercy Chaplet, to her and it is now prayed around the world.

Sister Faustina died of tuberculosis in 1938. Pope John Paul II declared her a saint in 2000 and designated the Sunday after Easter as Divine Mercy Sunday.
In addition to her story, the production offers a modern story within the drama that is designed to help audiences make a personal connection to current moral issues.

“Faustina: Messenger of Divine Mercy” is directed by Leonardo Defilippis, founder and president of Saint Luke Productions. Central Illinois residents may remember from his performances as St. John Vianney in “Vianney.”

For a preview of the play, visit DivineMercyDrama.com.