Family and faith have seen Dorothy Gilles through 102 years 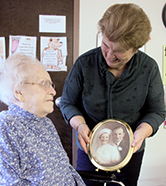 Photo Caption: Dorothy Gilles smiles as her daughter, Mary German holds a photo that was taken on her wedding day in 1938. Dorothy and Edwin Gilles were married for nearly 60 years.

PEORIA HEIGHTS — Dorothy Gilles may not say much anymore, but her life speaks volumes about the importance of family and faith over 102 years.

“We always went to Mass on Friday in Lent. Always,” said one of those daughters, Mary German of Galesburg, who visits Mrs. Gilles twice a week. “Mom would make an oven supper before we left so we could come home and eat. We always said the rosary every night in Lent.”

She added that her parents prayed for their family “for years and years.” Mrs. Gilles hasn’t been able to do that quite as often since she moved to Cornerstone nearly three years ago and German said when the prayers slowed, “That’s when we all started to get sick!”

“She and Daddy used to say a rosary every night before they went to bed,” German said, sharing a smile with her mother.

Dorothy grew up on a farm just south of Dunlap and Edwin’s family had a farm in the Kickapoo area. They met at a dance one Saturday night, but she later said she didn’t want to have anything to do with “a group of Kickapoo joy juicers.”

She eventually relented and the Gilleses were married on a cold January day in 1938. German pulls out a photo album with pictures of her parents as newlyweds in the back of a bobsled.

Three years later they bought a 380 acre farm between Princeville and Laura, and that’s where they raised their three sons and three daughters. German’s youngest brother, Ray Gilles, still lives there, and the family continues to host field trips for schools in Peoria County.

RICH IN MANY WAYS
In addition to corn and soybeans, the Gilleses had cattle, pigs and chickens. Mrs. Gilles also had a “huge garden” and canned “hundreds and hundreds” of quarts of fruits and vegetables.

“Every fall the basement was just packed with home-canned stuff and we did pretty good eating it up, didn’t we,” German said to her mother, who smiled and shrugged her shoulders. “I always said I’d like a dollar for every quart of food that you canned. I’d be rich, wouldn’t I?”

Even without those dollars, German said they were rich.

“We did a lot of things together,” she said. “Back then we had a lot of family get-togethers. Mom’s side of the family, a couple times during the summer, would have a big picnic. My dad’s side would get together. We were very close to our first cousins.”

They were members of St. Mary of the Woods Parish in Princeville, where Mrs. Gilles served as president of the Altar and Rosary Society for several years. German said her parents moved into Princeville in 1979 and Mrs. Gilles continued to live in her own home until she was 95.

She was at Independence Village in Peoria before moving to her current residence in time for her 100th birthday on Oct. 23, 2013.

In addition to a family dinner, Mrs. Gilles was honored at a cake celebration at Cornerstone — complete with accordion band — for her 102nd birthday last month.

German said cards continue to arrive for her mother. If you would like to add belated birthday greetings, write to Mrs. Gilles at Cornerstone Rehab and Care Center, 5533 N. Galena Road, Peoria Heights, IL 61616.