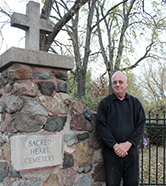 Photo Caption: Adolph Arnold stands in front of the new aluminum fence installed at Sacred Heart Cemetery in Pekin thanks to those who responded to fundraisers he planned with his sister, Angie Benassi.

PEKIN — Walking through Sacred Heart Cemetery with Adolph Arnold is like attending a family reunion. His parents, grandparents and great-grandparents are buried here, along with aunts, uncles, cousins and friends of the family, and he has a story for each one.

That’s why it was important for him and his sister Angie Benassi to do something when the iron fence around the small, peaceful cemetery was decaying and the one-lane road through the property needed to be replaced. Rather than raise the issue and expect someone else to address it, however, they offered a solution.

Benassi and Arnold had been doing fundraisers to benefit the Sisters of St. Francis of the Immaculate Conception in West Peoria, who staffed St. Joseph School in Pekin when the Arnold family lived in the area. While continuing to host annual shopping excursions to help their former teachers, they started a series of fundraisers for the cemetery.

“Our first was a Cubs-Cardinals game to St. Louis. The Cubs got beat 7 to 6. That was in May 2012,” Arnold told The Catholic Post. They put $400 in the bank from that event and kept going.

Over the years there have been four Cubs-Cardinals bus trips, three bus trips to football games at the University of Notre Dame, three shopping trips, four Peoria Chiefs baseball games and five pork chop fries. Arnold said the biggest fundraiser was a spaghetti dinner held in March 2014, which added more than $3,800 to the cemetery fund.

“We’ve got some people who donated who don’t have any family (in the cemetery) at all. They just want to help out,” Arnold said. “It’s unbelievable. People are so generous.”

He is grateful for that kindness because many of the people buried at Sacred Heart have been there a long time.

“There’s really not a lot of family left,” he explained. “You don’t see that many graves with flowers on them.”

TOO MANY TO NAME
“Back in the day, there was a Sacred Heart Church in Pekin. My father was a member of that church as a little boy,” said Arnold, who is now a member of St. Monica in East Peoria. “My grandfather, who I’m named after, was a caretaker at the cemetery in the 1930s and ’40s. Actually, he was a grave digger, by hand.”

The cemetery was established in 1875, but Sacred Heart Parish became part of St. Joseph Parish in 1931, after a fire destroyed Sacred Heart Church. The little cemetery is now landlocked — no more graves can be added and the few plots that remain are owned by the families of those already buried there.

Arnold said the iron fence on the north side of the cemetery had been there for 100 years and he was told the fence along Highway 29 was installed in the 1970s.

“You could walk up to the old fence and shake it. They cut one post and it just came down like dominos,” he said.

The new fence is made of aluminum, which is more expensive but will last longer because it shouldn’t rust, according to Arnold. That cost $8,000 to replace.

The cost of the road was projected to be $17,000, but Mike Cullinan of R.A. Cullinan in Tremont reduced the bid by $2,500. Then he made a donation in that amount from the Cullinan Memorial Trust in honor of his father.

Arnold said they also received a rebate because it required less asphalt than planned. He decided to split the money between the Pekin and East Peoria parishes, citing the generosity of parishioners and Knights of Columbus councils from both faith communities.

Arnold also offered thanks to Father Michael Andrejek, pastor of St. Joseph, and Steve Draher, the caretaker of Sacred Heart and St. Joseph cemeteries, and his wife, Donna Draher, for their help.

“There’s too many people to name,” he said. “If you start naming people you’re going to leave someone out. I don’t want to do that.”

Thank you notes are on the way, he promised.