LAST THINGS: Catholic cemeteries provide for our family of faith 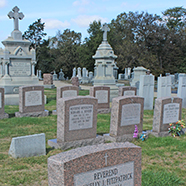 Photo Caption: While Catholics do not have to be buried in a Catholic cemetery, Deacon Bob Myers asks, “Why would you want to be buried anywhere else?”

Deacon Bob Myers knows that many people drive past Resurrection Cemetery and Mausoleum on Allen Road in Peoria every day and never give it a second thought because they believe only Catholics can be buried there.

They would be surprised.

“Years ago, if you were not Catholic, it was not impossible to be buried in a Catholic cemetery, but it was somewhat difficult,” he told The Catholic Post. A special dispensation would be needed and was normally granted, but it wasn’t a given.

Bishop Daniel R. Jenky, CSC, has made it clear, however, that any Christian is welcome to be buried in the 126 Catholic cemeteries of the Diocese of Peoria.

“When I do a graveside service, I take this book with me, just like he would, and that book says ‘Order of Christian Funerals.’ It doesn’t say ‘Order of Catholic Funerals,” Deacon Myers explained.

Deacon Myers is director of Catholic Cemeteries for the Diocese of Peoria, which has the most cemeteries of the six dioceses of Illinois. He is also director of the Catholic Cemetery Association of Peoria, which represents the families of loved ones buried in St. Joseph Cemetery, established in 1865, and St. Mary Cemetery (1882), both in West Peoria, and Resurrection Cemetery (1963) and Mausoleum (1971) in Peoria.

The mausoleum for the bishops of the Diocese of Peoria is located at St. Mary Cemetery and is surrounded by the graves of many priests and Sisters of St. Francis of the Immaculate Conception (Heading Avenue Franciscans). The Franciscan community is based in West Peoria.

Each year about 200 burials take place in St. Mary, St. Joseph and Resurrection alone, with 35 percent of them being for those who have chosen cremation.

“COMMUNITY OF BELIEVERS”
Deacon Myers said cremation is another topic that requires sensitivity and pastoral guidance for people unfamiliar with church teaching.

“Since 1963 the Church has lifted the ban on Catholics being cremated,” he explained, although the Order of Christian Funerals notes that it “does not enjoy the same value as burial of the body.”

That document reminds readers that the body of the deceased Catholic was once “washed in baptism, anointed with the oil of salvation, and fed with the Bread of Life” and therefore must be treated reverently.

Deacon Myers said it is the Church’s preference to have the body present for the vigil or wake service and the funeral Mass, with cremation taking place afterward. In 1997, however, the U.S. bishops were granted the right to permit the cremated remains to be present at the funeral liturgy.

While society seems to champion keeping the remains at home or distributing the ashes into several small vials to be worn by the loved ones of the deceased, church teaching calls for them to be treated with the same respect given to the human body, he said. That means placing the ashes in a “worthy vessel” and burying them in the ground or entombing them in a mausoleum or columbarium.

The Order of Christian Funerals — and the laws of many states — does not permit the ashes to be scattered, Deacon Myers added.

Since there are so many options for burial and decisions to make at the time of death, he encourages people to pre-plan. That way the choices have been made and their preferences will be known by their family and friends instead of have them guess what a loved one would want, according to Deacon Myers.

While Catholics do not have to be buried in a Catholic cemetery — the ground can be consecrated in any cemetery — Deacon Myers said, “Why would you want to be buried anywhere else?”

Not only is the ground blessed by the bishop at the time of the cemetery’s dedication, but the cemeteries continue to represent the presence of a “community of believers.”

“You’re with other Catholics, your Catholic ‘family,'” he said.