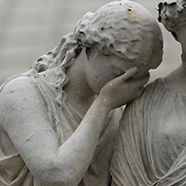 Photo Caption: This statue of Grief stands near the U.S. Capitol dome in Washington, D.C. It can be difficult even for people of faith to know what to say to someone who is dying, or grieving.

Grief is a journey that everyone takes, but it will look different for each person.

“There is no cookie cutter,” said Donna Medina, director of hospice services for OSF Home Care Services. “There are definite signs when grief is out of control and then it needs serious intervention and counseling, but normal grief is a journey.”

Not only is it normal to grieve, it’s necessary, she said.

“If you don’t allow yourself to grieve it really eats away at the inside of you,” Medina told The Catholic Post. “The grief has to be worked through. That’s healthy.”

When a friend is dealing with the death of a loved one or their own serious illness it isn’t always easy to know what to do or say, she acknowledged. Rather than look for something major to do, focus on the little points of contact and be creative, she said.

For example, loneliness can be an issue but people don’t want to be a burden, even if you’ve asked them to call you, Medina explained.

“If I’m going to make lasagna tonight, maybe I’ll make two small pans instead of one big pan and take one over to Mary and visit for 30 minutes,” she said. “Or I see Suzy coming to church alone every Sunday now. Maybe next Sunday I’ll call her up ahead of time and say, ‘I’ll pick you up for church and we can visit on the way there and on the way home.'”

JUST BE PRESENT
Medina said one of the most touching things she heard about occurred after a neighbor’s husband died.

“She was thrilled when the neighbor down the street came over and said, ‘Can I take out your screens and put in the storm windows for you?’ In the spring he came back and switched them out again,” Medina said.

Her friend baked a coffeecake and invited her Good Samaritan to have coffee and coffeecake when he was done and sent the rest home for his family.

“It was a real help. Something concrete,” Medina explained. “Think what you do at home that you would need some help with if your spouse wasn’t there and offer that.”

Sister Sheila McGrath is a volunteer in the surgical waiting room at Trinity Hospital in Rock Island now, but for many years was chaplain at Quad Cities hospitals and hospice programs on both sides of the Mississippi River. She is also subprioress of her Benedictine community at St. Mary Monastery in Rock Island.

“It is a privilege to walk with people as they are dying,” she said. “A lot of it is just presence that they feel is sincere. And it needs to be that person’s agenda — not what I think they need. . . . At their own pace.”

This situation requires good listening skills, free from judgment if the person is feeling angry or sad. This isn’t the time to say, “You shouldn’t feel that way,” she said.

“Let them verbalize and talk about their sadness and don’t judge them on that,” Sister Sheila advised. “I often started with ‘Can you name what is most difficult as you deal with this?'” and might follow up with “Tell me more about that.”

“Sometimes just talking can lessen what they’re feeling,” she said.

While visits are important, Medina suggested keeping them short. Her policy is 10 minutes or less.

What if a friend who is grieving the loss of a loved one or their own health starts to cry? Let them, Medina said.

“Pat them, comfort them, be a presence, but don’t take away that ability to cry,” she said. “Crying is a healthy release of some of those fears, some of those emotions.”

Sister Anne Germaine Picard, SMP, who was a hospital and hospice chaplain in North Dakota before moving to Princeton to start her ministry as vocation director for the Sisters of Mary of the Presentation, said she often encourages people to journal as a way of praying and verbalizing what they’re feeling.

Making a scrapbook or planting something in honor of the one who died are creative ways to keep their memory alive, she said.

Most of all “be gentle with yourself. Do not push yourself to say, ‘I ought to be better,'” Sister Anne Germaine said. “No. I loved this person and it’s going to take time.”