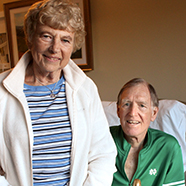 Don Cassulo, a longtime member of the Peoria Fire Department who is in hospice care for kidney cancer, said his family hesitated to talk about what was happening for a long time. It was especially difficult for Judy, his wife of 55 years.

“Say what’s important,” he recently told The Catholic Post during an interview at the OSF Richard L. Owens Hospice Home in Peoria. “Don’t be afraid to talk about it.”

As a firefighter for 24 years, Mr. Cassulo faced his own mortality many times. Working on the rescue squad, he was part of a crew that was called for every accident or fire throughout town. A heart attack and bypass surgery after one stressful call led to his retirement in 1993.

“We always stayed ahead of it,” Mr. Cassulo said of the danger. “We took care of each other. The guy next to me was first.”

He said the same applies to his family, which includes three sons, two daughters and eight granddaughters.

“I’ve pretty well got everything set up,” he said, noting that they have also talked about the funeral Mass and luncheon at St. Vincent de Paul, where he and Judy have been parishioners for more than 50 years, and where any memorial donations will go.

He said he’s been anointed several times and talked about confession — “things you know you’re supposed to do.”

“I think we’re ready,” Mr. Cassulo said. “If you don’t you’re fooling yourself. You’re here. Take care of it.”

A golfer, fisherman and hunter, he has been to a Master’s Tournament, and traveled to Alaska to go fishing and sightseeing. His allegiance to the St. Louis Cardinals is clear from the fleece blanket that is draped across the foot of his bed and he has been to more than one World Series game to cheer them on.

Some things on his “bucket list” remain undone, such as driving through Napa Valley in California with Judy. A photo of the couple in Hawaii, where they went many times, attests to their love of traveling together and with their family.