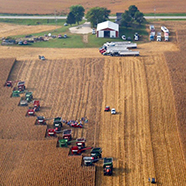 Photo Caption: Combines from neighboring farms line up to bring in the corn crop at the 450-acre property of Carl Bates east of Galva. Bates, a member of St. John Parish, is in failing health because of cancer.

There are times when a Facebook message or a greeting card just won’t do.

Rural people have understood that for generations.

“In a rural community, you just pay attention to each other,” said Jody Quiram, who was raised in rural Gifford and now lives in Sidney. “You know when people are in need. It’s old school manners. It’s what you do. You connect with people by going to see them, rather than by a computer.”

There may be no more dramatic display of how rural dwellers take care of one another than when farmers join to bring in the harvest of a neighbor in need. The show of charity and solidarity has happened in at least four locations in central Illinois this fall.

Quiram witnessed the caring spectacle Oct. 6 when more than 60 farmers gathered to harvest the 600 acres of corn and soybeans planted and cared for by her brother, John “Bud” Hannagan.

Hannagan, a member of St. Lawrence Parish in Penfield who had farmed family land southeast of Gifford throughout his life, died unexpectedly on Aug. 28 at the age of 57.

“It was pretty emotional,” said Quiram, her voice breaking a week later as she described “a sea of semis, combines, wagons and tractors.”

“Buddy had done that before,” she said of her brother, who she described as “a giving person” with many close friends. He is survived by his wife, Hillary, and two sons.

“The tables were turned, and they all showed up,” said Quiram. By 3 p.m., the corn had been harvested. The next day the beans were in.

“HE’D DO ANYTHING FOR THEM”
Ten days earlier, farmers and neighbors showed up en masse at the acreage of Carl Bates of rural Galva. Bates, 55, a member of St. John Parish, is in hospice care with end-stage cancer.

While the harvest of Bates’ 450 acres of corn normally would take a week, the 40 neighbors accomplished it in 10 hours with the help of 10 combines, 12 grain carts, and 16 semitrailers.

“It was exciting. It was loving,” said Deacon John Holevoet of Galva. Deacon Holevoet is Bates’ father-in-law and told The Catholic Post “Carl is like a son to me.” The two went through Cursillo together in 1997, and the following spring Bates entered the Catholic Church.

Deacon Holevoet, who serves the Galva parish, described his son-in-law as “a fella that doesn’t preach the Gospel, but he lives the Gospel.” The neighboring farmers came to his aid because “they knew he’d do anything for them.”

With Bates’ cancer treatments ended, Deacon Holevoet said “we’ll just prepare him for eternity.” Carl and his wife, Pam, are the parents of two and grandparents of three, with a fourth grandchild expected in November.

Carl Bates greeted the harvest volunteers in the morning, and made a point of going out to thank them in the evening.

“It’s good to see good things happen in the world rather than the negative things you hear about,” said Deacon Holevoet.

“GOD BLESS THESE FARMERS”
Thousands have now heard of “the most amazing harvest” at the Bates farm.

An album of photos and an accompanying story was posted on the Facebook site of Rumbold and Kuhn, a local farm product and storage company that donated the use of 12 semitrailers to the effort and dedicated the day to accepting the Bates harvest. The photos, including striking aerial views taken via airplane and drone, have been shared more than 5,000 times and led to regional and even national media coverage.

“It’s been all over the world,” said Deacon Holevoet.

“God bless these farmers that know how to give back always,” wrote Sharon Knight in a representative comment from among hundreds inspired by the photos. “I have experienced this first hand. That’s just what farmers do.”

Deacon Holevoet also experienced a helping harvest when he just 18. After his father died from cancer, neighbors stepped in to take care of the family’s 160-acre operation, picking all corn, hauling manure and plowing fields in two days.

Farming has changed, with larger operations and fewer farmers. But this helping tradition remains.

“It was touching to see them all working,” said Quiram of the volunteers at the Hannagan farm. “There was a great camaraderie.” While voicing deep gratitude, she admits it was also a difficult time as it drove home the reality that her brother “wasn’t showing up.”

Two more examples of a helping-hand harvest this fall took place in rural McLean and near Ottawa.

According to the Bloomington Pantagraph, friends and neighbors of Randy Van Hoorn, who died unexpectedly on Sept. 19 at age 60, completed the harvest of his crops in late September.

“It’s good to know friends are out there willing to help,” lifelong friend Buster Compton told the Pantagraph. “You find out just how much you need them.”

Meanwhile, family and friends of William “Billy” Krug of Newark harvested his crops of corn and soybean north of Ottawa and delivered them to market in mid-October. According to The Times newspaper of Ottawa, Krug — a lifelong farmer — died May 29 as the result of a traffic accident.

More than 30 family members and friends worked to combine a total of nearly 800 acres at five different sites. Connie Wier, Krug’s sister, called the community effort “such a blessing and a comfort for the family.”