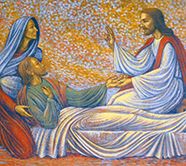 Photo Caption: This mural from St. Joseph Church in Peoria depicts St. Joseph on his deathbed, held in the arms of Mary and comforted by Jesus. He is the patron of a happy death.

It is something that comes to every person, and yet no one wants to think about death. The closest many people are willing to come is observing what is portrayed in television programs or the movies.

To deny it, however, is to deprive ourselves of what we need to make what Catholics used to call “a good death,” according to Msgr. Stanley Deptula, director of the diocesan Office of Divine Worship.

“To make a good death is to face the reality of death. But the human reality of death only makes sense and begins to have value in the face of divine death — Jesus’ death on the cross,” he told The Catholic Post.

“Yes, we will die, but Christ died. Since he died, if we die with him we can hope to live with him,” Msgr. Deptula said. “That’s the heart of the Christian mystery of death.”

While it offers comfort to know that what we all face was faced first by Christ, the church offers several other “strengths” to help people prepare for a good death. The first is the anointing of the sick.

Progress has been made in helping people understand that this sacrament is appropriate for those who are seriously ill or impaired by old age and not merely “last rights,” he said, but it is also administered as someone approaches death.

“This is a real sending forth. Do not be afraid. That’s a good death,” Msgr. Deptula said. “Do not be afraid because you are strengthened by the sacraments, by the prayers of the church.”

TREASURY OF PRAYERS
He added that among the church’s “boundless treasury” of indulgences is the apostolic pardon, the final indulgence at the time of death.

“By the virtue of the redemption of Christ and the merits of Our Lady and the saints, a priest absolves from all temporal punishment in this life and in the life to come the soul who is about to go forth,” Msgr. Deptula explained. “That’s a good death.”

Another way the church imparts strength to the dying is through viaticum, “the body, blood, soul and divinity of Jesus Christ that is our bread for the way,” he said.

“Then there are prayers right after death, so there is a treasury of prayers,” Msgr. Deptula said. “Those prayers say a lot about what we believe about a happy death.”

A faithful view of death does not deny the suffering of death, real pain or real mourning, he emphasized.

In addition to being the husband of Mary and stepfather to Jesus, St. Joseph is the patron of carpenters, workers, fathers, travelers and the universal church, and the secondary patron of the Diocese of Peoria. He is also the patron of a happy death.

A statue of St. Joseph the Worker has graced St. Mary’s Cathedral in Peoria and an image of the death of St. Joseph will be painted above that side altar as part of the “once a century” renovation that is taking place, according to Msgr. Deptula.

“We live in a world that has forgotten real death and a faith-filled death,” he said. “I think Bishop (Daniel R.) Jenky wanted to present that image of a good death, of a holy death, of St. Joseph, patron of a happy death, to remind us of those most important things, those four last things: death, judgment, heaven and hell. Those things we cannot avoid and therefore should not forget.”