Full spectrum of pro-life cause evident at Respect Life Dinner 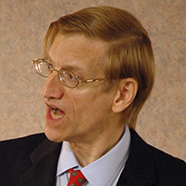 Photo Caption: Keynote speaker Burke Balch warned of the “insidious” step-by-step acceptance of euthanasia during his keynote address at the Respect Life Dinner in Peoria on Oct. 4

The full spectrum of the church’s pro-life movement shone at the 34th annual Respect Life Dinner on Oct. 4 in Peoria.

Strong defenses of the sanctity and dignity of life were given on behalf of those vulnerable in the womb as well as persons with disabilities, near death, or in advanced years.

Even the more than 150 guests who gathered at Barrack’s Cater Inn reflected the scope of the movement. The crowd included a sizeable youth contingent from Peoria Notre Dame High School, several political figures, clergy and religious, and pro-life stalwarts who have spent decades advancing the cause.

“This is a wonderful reunion of friends,” said Father William Miiler, IC, chairman of the diocesan Respect Life Board, noting how the annual event not only educates and raises funds to support pro-life activities, but also offers inspiration, encouragement, and mutual support.

Waldschmidt, a Henry resident, was “one of the great soldiers of the pro-life movement,” said Father Millerbute. A longtime volunteer and supporter of the Family Resources Center, Waldschmidt died on July 31 at the age of 68.

“Allan gave a very wonderful witness in his life of what it means to be so committed to Christ and his church, so convinced of the importance of promoting the Gospel of Life and of confidently opposing the culture of death, that he gave heroically of his time, talent and treasure for the pro-life movement in our area,” said Father Miller. Robert Eckert then honored Waldschmidt by leading the crowd in the singing of “Friends” by Michael W. Smith.

After local pro-life leaders offered updates on abortion protests and crisis pregnancy support efforts such as Life Chains, 40 Days for Life, and the Women’s Care Center, Balch focused on expansion of euthanasia and the threats it poses to those most vulnerable in our society.

“We must pray that he vetoes it,” said Balch. Gov. Brown, however, signed the bill into law the following day.

“We are facing a step-by-step progression of the culture of death,” Balch added, warning the public that the progression is not about so-called “hard cases,” or individual rights and choices, but often about economics, cost-savings, and the “burdens” the aged and ill are on the healthy and strong as the population ages.

Balch quoted church leaders as insisting that the dignity and value of life remains and must be respected through all its stages.

“It’s the same old thing we have been dealing with century after century,” said Balch. “It is the marginalization, the writing off, the de-humanization of those who are most vulnerable in our society.

Just as pro-lifers work for positive alternatives to assist women facing problem pregnancies, they must also advocate for compassion, care, and assistance to those “at the vulnerable edge of our society,” said Balch.

He was introduced by Jennifer Houser, Kaleb Bloomfield, and Mariella Rebello, leaders of Peoria Notre Dame’s Teens for Life group, who also updated on their activities.

Among the politicians present were Peoria Mayor Jim Ardis, who offered welcoming remarks, and newly elected U.S. Rep. Darin LaHood (R-18).
LaHood, who won a special election in early September, remarked how his first weeks on the job were historic with the visit of Pope Francis and the resignation of House Speaker John Boehner. He drew cheers when he announced “I was very proud that my first vote was to defund Planned Parenthood.”

As it has been for decades, the evening was emceed by Charles Owens of Henry. “You won’t find a bigger supporter of pro-life,” said Pete Smith of Owens. Smith also updated on the continuing pro-life efforts of his wife, Jan — founder and former director of the Family Resources Center — who was unable to attend because of illness.