Distinguished Guardian of the Faith honor to Dr. Cunningham 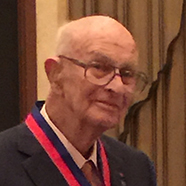 Photo Caption: Dr. Clement Cunningham of Rock Island is shown at the Catholic Medical Association’s annual education conference in Philadelphia, where he was in the first group to receive the new association honor.

ROCK ISLAND — During more than six decades of membership in the Catholic Medical Association and its predecessors, Dr. Clement P. Cunningham has done almost everything possible to assist the national group’s mission of helping physicians grow in the spirit of Christ in their personal and professional lives.

But on Oct. 3 in Philadelphia, the association found a way to give the retired Rock Island family physician, now 93, a memorable new “first” — and a healthy dose of gratitude.

“I’m overwhelmed by it,” said Cunningham of being named among the first group to receive the Catholic Medical Association’s new “Distinguished Guardian of the Faith” recognition.

Cunningham served as president of the association, then known as the National Federation of Catholic Physicians Guilds, from 1966 to 1967. A consultant to the president for many years thereafter and its longest serving member, he was presented with a medallion by the association’s board of directors during a banquet Saturday evening at the CMA’s 84th annual education conference.

The mission of the Catholic Medical Association is to uphold the principles of the Catholic Church in the practice of science and medicine, said Dr. Les Ruppersburger, incoming association president who bestowed the award on Cunningham and 18 other first recipients.

That definition describes the life mission of Cunningham, who retired in 1990.

“On the medical-moral issues I was pretty well lined up with the magisterial teachings of the church,” he told The Catholic Post before leaving for the Philadelphia conference.

“INSPIRING BEYOND WORDS”
Cunningham’s friends use a bit stronger language to describe the impact, locally and nationally, of their humble colleague.

“His tenacity and devotion, for me, are inspiring beyond words,” said Dr. Timothy Millea, who serves as president of the newly formed St. Thomas Aquinas Guild of the Quad Cities.

Millea, from Davenport, and Dr. Michael Porubcin of Moline formed the new CMA guild for area medical professionals in 2014, but agreed it wouldn’t have happened without Cunningham’s help and guidance.

“Clem has been in the trenches as a model of Catholic medical ethics and values longer than we’ve been alive, and his example, wisdom, and guidance have been our lifeblood as the Guild has grown,” said Millea. “He is unwavering in his commitment to the Magisterium and to others who try to live their faith daily.”

Porubcin called Cunningham “an outstanding example of someone who has always lived his life fully focused on three main priorities — God, family and society at large, in that particular order.”

“His life is rich in achievements born from the combination of his soft demeanor and strong character, anchored firmly in the magisterial teachings of the Catholic Church,” added Porubcin.

Millea and Porubcin were among a contingent from the Quad Cities guild who attended the national conference and cheered for Cunningham. The group included Father Charles Klamut, pastor of St. Ambrose Parish in Milan and chaplain of Alleman High School, and Father Johnjoseph Logan, administrator of St. Mary and Sacred Heart parishes in Rock Island.

VISION AND PERSEVERANCE
When Cunningham joined the Catholic Medical Association in 1953, the group had 13 guilds nationally. He was asked to chair the membership committee, and the organization would grow to more than 100 guilds and 10,000 members.

The organization experienced a dramatic decline after the publication of Pope Paul VI’s encyclical “Humanae Vitae” strongly opposing contraception and the 1973 U.S. Supreme Court decisions legalizing abortion. But it is experiencing a resurgence, and Cunningham’s vision and perseverance throughout the transitions were among the reasons for his recognition last weekend. The education conference — which discussed issues ranging from natural family planning to end-of-life matters — was attended by about 800 Catholic health professionals.

Cunningham and his late wife, Florence, are the parents of four. An active member of St. Pius X Parish in Rock Island, Cunningham’s support of the Catholic Church has earned him papal recognition as a Knight of St. Gregory the Great and diocesan honors as a recipient of the Pere Marquette Award.

Cunningham has long enjoyed photography, and through the years has supplied The Catholic Post with several photos of popes as they travel to the United States. Ironically, the Catholic Medical Association’s conference was originally scheduled for the previous weekend in Philadelphia, but was rescheduled because of the visit of Pope Francis.

“I was hoping we could get him to join our meeting,” said Cunningham.
Cunningham was not the only local honoree at the Philadelphia conference. The St. Thomas Aquinas Guild of the Quad Cities was one of only three to receive the Catholic Medical Association’s “Outstanding Guild Award.”