Religious share the joy of their consecration with one another 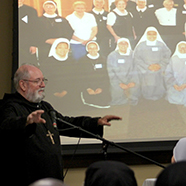 Photo Caption: Abbot Philip Davey, OSB, talks about the vows consecrated men and women take to “wake up the world.”

Before the members of religious communities of women and men around the Diocese of Peoria welcomed the people who would participate in the Wake Up the World Conference Sept. 18-19, they shared the joy of their consecration with each other.

More than 100 priests, Sisters and Brothers gathered at the Spalding Pastoral Center in Peoria on Sept. 17 for evening prayer and dinner. The speaker for the opening of the conference, sponsored by the Peoria Association of Religious Life (PEARL), was Abbot Philip Davey, OSB, of St. Bede Abbey in Peru.

The evening ended with a ceremony to recognize the years of service given, up to 70 years. Applause filled the room as the men and women stood when their decade was called.

Sister Marianne Burkhard, OSB, director of the diocesan Office of the Tribunal and a member of the conference’s planning committee, said when Pope Francis called for a Year of Consecrated Life he asked the religious to look to the past with gratitude, live in the present with passion, and embrace the future with hope.

“We pray for God’s grace. We pray for all the people who need us, and we witness to this God who is such an amazing God and who changed our life,” she said. “Through us we hope many lives are changed, as well. We do all this with humility because we know all this is really pure gift — his grace without which we couldn’t be and couldn’t do what we do.”

VOWS PRESENT CHALLENGE
While more and more lay people are accepting their call to holiness and doing the things that had been done by consecrated people in the past, the witness of men and women religious is needed now more than ever, according to Abbot Philip.

“Our vows are incredibly appropriate to the title Pope Francis gave this yearlong time of prayer: ‘Wake Up the World.’ Our vows are a challenge to the world,” he said.

The vow of poverty, for example, goes against how society measures success: Making money, having a big house, driving a new car. People without those things are thought to be failures.

“Our vow of poverty says, ‘No. We don’t need all that stuff. That stuff is not what’s really important,'” Abbot Philip said.

By choosing a poor and simple lifestyle, consecrated women and men stand with the poor and invite people to join them in doing something.

“We are trying to wake up the world to a fair treatment of all people and an equal distribution and care for our environment simply by taking that vow and trying to life it,” he said.

People of self-will may struggle with obedience, but it is actually a great gift, Abbot Philip told them about this vow.

“God can do great things through us when we’re willing to be open and obedient,” he said. “I could go through an incredible list of things I never thought I was going to do or be asked to do and have to do and I can find in every one of them an incredible moment of grace.”

With the vow of chastity, those in consecrated life challenge society’s view that sexuality can be separated from love and used as another form of recreation, devoid of concern for life and working with God to create life. By living that vow, they are showing the world what it means to truly respect life and family and teach others to do the same.

“Imagine, every time you walk around, that you are the shining presence of Christ for the people of your community and this locality,” Abbot Philip said. “You are the person who God is calling to speak to them words that can lead them to joy, to peace, to happiness, to community, and most importantly, to God. That, I think, my brothers and sisters, is how we wake up the world.”