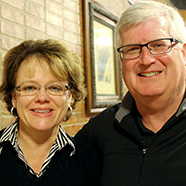 Photo Caption: Bess and Dave Cratty of Corpus Christi Parish, Galesburg, are celebrating their fourth anniversary at the World Meeting of Families in Philadelphia.

GALESBURG — Dave Cratty is going to have to work hard to top this year’s anniversary trip with his wife, Bess.

The Crattys will celebrate their fourth wedding anniversary on Thursday, Sept. 24, at the World Meeting of Families in Philadelphia with “a million of our closest friends we haven’t met yet.”

Their trip includes special seating for WMF participants at the Mass with Pope Francis on Benjamin Franklin Parkway this Sunday, Sept. 27.

“It’s different from anything we’ve done — and we won’t do it again,” Bess told The Catholic Post with a laugh as they prepared for their trip east.

This is the second marriage for both of them and the Crattys, members of Corpus Christi Parish in Galesburg, said they were looking forward to the support of other Catholic couples who are striving to live a sacramental marriage in a broken world.

“Sometimes it’s just nice to go and hear the perspective of another person,” Bess said. “It’s a crazy time. It seems like there are no boundaries — anything goes. This will give us a chance to be with people who are similar to us.”

Dave said he was looking forward to hearing speakers like Scott Hahn of Franciscan University in Steubenville; Helen Alvare, former spokeswoman for the U.S. bishops on respect life issues; and Bishop Robert Barron, newly ordained auxiliary bishop of the Archdiocese of Los Angeles and founder of Word on Fire, as well as bishops from around the world. The presence of Pope Francis, who announced his involvement after the Crattys started making plans to attend the World Meeting of Families, was a bonus.

Because they met and married later in life, each anniversary is precious and that’s why they celebrate in a special way every year, Bess said.

MORE TO LOVE
A native of Galesburg, Dave left after college to teach in Antioch and also worked in insurance marketing for 16 years. He was assistant superintendent of finance at Crystal Lake Elementary School District when his sister-in-law fixed him up on a blind date with Bess, a nurse at Galesburg Cottage Hospital.

After nearly two years of having a long distance relationship, Dave moved back to central Illinois and got a job as finance manager for the Special Education Association of Peoria County. He asked Bess to marry him on Christmas Eve 2010, and they were married by Father Joseph Presley, IC, at Corpus Christi the following September.

The Crattys know firsthand the challenges blended families face. Dave brought two grown sons to their marriage and Bess has three daughters, two of whom are still at home.

“We’re very fortunate,” Dave said, noting that not only do their children get along but his sons call Bess on Mother’s Day.

“Those are the unexpected things in life. I thought I was done with children and yet my life is so much more full,” he explained. “It’s not like love is a finite amount and there’s less with my sons to have that with the girls. It’s different.”

“If you put the effort in, you can do it,” Bess said. “This (meeting) will support that.”

Dave expressed gratitude for having a second chance at love and marriage.

“We both had long marriages — 20-plus years each,” he said. “As Catholics, you expect it to be a lifelong vow. Then it’s not.”

While it can be humbling to “stumble,” he said doing the necessary work to have a sacramental marriage has been worth it.

“My experience is that now there are more people in my family, more people to love,” he said.