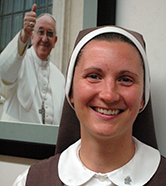 Photo Caption: Sister Sara Kowal, SCTJM, is shown with a framed picture of Pope Francis at Peoria Notre Dame, where she is a theology teacher and campus minister.

One of the most prized tickets of Pope Francis’ trip to the United States has just been given to a teacher at Peoria Notre Dame High School.

Sister Sara Kowal, SCTJM, will be among only a few hundred invited guests in the gallery of the U.S. House of Representatives Chamber Sept. 24 when Pope Francis makes an historic address to a joint meeting of Congress in Washington, D.C.

The theology teacher and campus minister was invited to attend the address by newly elected U.S. Rep. Darin LaHood (R-IL, 18th District). Each member of Congress was given one guest ticket for the gallery, the balcony above the House Chamber where the public can witness the proceedings of Congress. Other guests will gather on the West Front of the Capitol to watch a live broadcast of the pope’s remarks.

On Tuesday, LaHood — a member of St. Vincent de Paul Parish in Peoria who won a special election Sept. 10 to replace former Congressman Aaron Schock and is being sworn in just this week — surprised Sister Sara with the invitation via a telephone call.

The two have never met.

“He knew of me through others who recommended me to him,” said Sister Sara, who is beginning her fourth year at Peoria Notre Dame. She formerly served at the St. John Paul II Catholic Newman Center at Illinois State University in Normal.

Sister Sara was quick to express gratitude to LaHood, and to God.

“I give thanks to the Lord for the opportunity given me,” Sister Sara told The Catholic Post. “It’s a privilege to represent all those people,” she said, including her school, the Diocese of Peoria, those in the 18th Congressional District, and especially her religious community — the Servants of the Pierced Hearts of Jesus and Mary.

The privilege of sitting in the House Gallery when Pope Francis becomes the first pontiff to address a joint session of Congress also comes with a responsibility, said Sister Sara.

“Part of the responsibility will be to then speak about what the Holy Father desires for our nation,” said Sister Sara. One way she will do that is by writing a report on her experience to be published in The Catholic Post, the newspaper of the Diocese of Peoria.

Pope Francis’ speech to Congress — where about 30 percent of lawmakers are Catholic — may be the most closely watched of the pope’s talks during his visit Sept. 22-27 to Washington, New York, and Philadelphia.

Sister Sara said she was “deeply moved” when she saw that the address comes on the feast of Our Lady of Mercy and only a few months before the start of the Holy Year of Mercy proclaimed by Pope Francis. She believes God intends “to pour mercy on our country though our Holy Father’s visit.”

While hastily making travel arrangements on Tuesday, Sister Sara explained why lodging in Washington, D.C. will not be a problem. Several members of her Miami-based religious community had already planned to be in the nation’s capital for the papal visit and are staying as guests in a private home. In addition, Mother Adela Galindo, SCTJM — foundress of the Servants of the Pierced Hearts of Jesus and Mary ? is among the presenters at the World Meeting of Families that week in Philadelphia.

Sister Sara, who has been to Washington several times as a participant in the national March for Life, has never been inside the U.S. Capitol. But being present for Pope Francis’ address to Congress next Thursday may not be the only highlight of her unexpected trip.

“I will also be able to attend the canonization Mass on Wednesday,” she said of the liturgy scheduled on Wednesday at the Basilica of the National Shrine of the Immaculate Conception at which Pope Francis will canonize Blessed Junipero Serra, a Spanish-born Franciscan Friar known for starting nine Spanish missions in California in the 1700s.