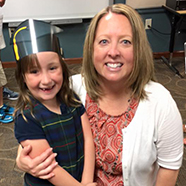 Photo Caption: Jennifer Havens and Celia French already had a bond as teacher and student at Epiphany School, Normal.

NORMAL — Theresa French wasn’t sure what her daughter Celia was choking on when the child started poking her and pointing at her throat in the midst of Fellowship Weekend activities at Epiphany Church. She just knew the 6-year-old needed help — fast.

In desperation, she turned to Jennifer Havens, who had been Celia’s kindergarten teacher last year. It was the right move.

Like all teachers at Epiphany School, Havens had been trained in first aid and CPR, and she started the Heimlich maneuver immediately.

“It happened so fast, but it seemed like slow motion in my head,” she told The Catholic Post. “I was worried it wouldn’t work.”

After about 15 thrusts, Havens was able to dislodge the object that was causing the trouble — a piece of purple hard candy. It sailed a couple feet before landing on the floor of the parish center.

“I can still hear it,” Havens said, growing tearful. “It was so big. I could see how that was keeping her from breathing.”

“I don’t think Jennifer or I will ever forget the sound of that hard candy hitting the floor when she was able to get it to come out,” Theresa French wrote on Facebook the day after the Aug. 22 incident. “I will never be able to see you again without hugging you and telling you, ‘Thank you!'”

“I am just thankful that Celia is OK,” Havens said. “Being a mom I can just imagine the panic. I thought, ‘This has to work.’ I’m so thankful.”

SHE WASN’T ALONE
The two women happened to be standing next to each other because they were sharing a table at the annual Fellowship Festival, which provides an opportunity for parishioners to learn more about the ministries, organizations and committees at Epiphany. Havens was representing the Normal school and Central Catholic High School in Bloomington, while French was offering information as president of the Epiphany School Club.

Food is available throughout the event and several of the tables had baskets of candy out for the visitors.

Havens taught kindergarten for four years at Epiphany before being named the lead teacher for Catechesis of the Good Shepherd, a new faith formation program there this year. She credits her quick response to the training the teachers and school staff receive every other year at the direction of principal Michael Lootens.

The instructors are Shelly Gruenwald and Jason Welch, who are parishioners and teachers at Central Catholic. The CPR training includes how to do the Heimlich maneuver and how to use an automated external defibrillator (AED), which can be found in all Catholic schools of the Diocese of Peoria.

“I probably don’t have perfect textbook form, but it worked,” Havens said, admitting to a few seconds of doubt while she was attempting to rescue Celia. She knew she wasn’t alone, however.

The whole thing happened under a large crucifix that hangs in the parish center.

“I definitely feel like we were being watched. We were being taken care of,” she said. “When I go in the parish hall and see the crucifix, I can’t believe it happened.”

JUST DO SOMETHING
Embarrassed by all the attention, Celia just wanted to go home and at first asked her mother not to tell her older brother and sister anything. She was afraid to eat dinner that night, even though it was pizza, but eventually ate something.

She had a sore throat, but was back in school on Monday morning.
“Her only repercussion is thinking her mother and Mrs. Havens are crazy. Every time we see each other we tear up,” Theresa French said.

There has been another repercussion, this one on the parish level. French said they are trying to arrange training in first aid and CPR for parishioners, especially members of the Welcome Team, so someone will always be available to help.

Havens said if she could do it, anyone can — and should.

“I think the important thing is for someone to just do something, even if they’re not sure they’re doing it right,” she said, adding that during training they were told the rules were important but it was more important to try than do nothing at all.

Lootens said he makes the training available, hoping that it will make a difference and it did.

“Jennifer was able to make a difference in that little girl’s life,” he said.