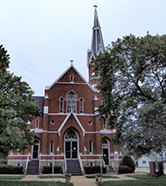 Photo Caption: The present Sacred Heart Church, dedicated in 1900, recently underwent updates including a refurbishing of statues of Mary and Joseph which had been in the church for 100 years.

FARMER CITY — When Sacred Heart Parish was established 150 years ago, many of the parishioners worked on the railroad or family farms. Jobs now take them to Champaign or Bloomington, but the solid foundation of faith hasn’t changed, according to Father Jim Henning, OFM Conv.

“They are willing to come back here and work very hard for the parish,” said Father Jim, pastor. He also serves St. John the Baptist in Clinton and St. John the Evangelist in Bellflower.

Parishioners celebrated Sacred Heart’s anniversary quietly, with a special Mass at 4 p.m. on Saturday, Aug. 29. At the end of Mass, refurbished statues of Mary and Joseph, which had been in the church for 100 years, were unveiled.

The celebration continued with a meal in the parish hall.

“We had a bunch of kids running around the hall. It was nice to see the youth represented along with the older parishioners,” Father Jim said.

In addition to the refurbished statues, the church received new carpeting and a new credence table to allow the deacons to purify the vessels used for Communion. Because the vestibule often doubles as a “cry room,” the interior doors between the front doors and the nave of the church were replaced with glass doors so parents with small children can still participate in Mass.

Father Jim said the updating was done in preparation to host confirmation for 26 students from the Farmer City, Clinton and Bellflower parishes, as well as St. Patrick in Wapella last weekend. The parishes started collaborating as a result of the Growing in Faith Together process and this is the first time they worked together to get the students ready to receive the sacrament.

“There was a very positive response,” he said.

PREDATES DIOCESE
Established in 1865, Sacred Heart was a mission of Our Lady of Lourdes Parish in Gibson City. Masses were celebrated in the homes of parishioners until a frame church was built. The cornerstone for the current brick church was laid by Archbishop John L. Spalding on Aug. 25, 1899, and he dedicated the church on Nov. 14, 1900.

Sacred Heart was served by Franciscan priests from St. Mary in Bloomington for many years. It became a parish in 1901 when the first resident pastor, Father M.J. Abbott, was assigned. He also assumed pastoral care for St. John in Bellflower.

When the interior of the church was remodeled in 1993, a rose window was discovered behind the high altar. Between 1998 and 2000, an elevator was installed, bells were placed in the steeple, a Marian garden was planted, and a statue of the Sacred Heart was placed outside the church.

A marble statue of Mary was added to the parish grounds two years ago, and blessed by Bishop Daniel R. Jenky, CSC.

Father Jim has been the pastor since 2006.

For a complete history, visit the parish’s website at sacredheartfc.org. In his blog, Father Jim also offers reflections on “Laudato Si’: On Care for Our Common Home” by Pope Francis.