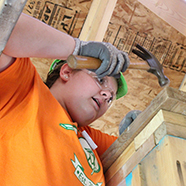 Photo Caption: Alleman High School junior Samantha Sharp gave up a Saturday morning to work on the Pope Francis House in Davenport, but doesn’t consider it a sacrifice. “They need a home and I’m here to help.”

DAVENPORT, Iowa — While his U.S. itinerary may not include the Quad Cities, Pope Francis’ spirit is alive here in a very concrete way. Make that concrete, wood, drywall, plaster and paint.

Habitat for Humanity Quad Cities has received a $60,000 grant from an anonymous donor to build a house in honor of Pope Francis. The average cost of a Habitat house in this area is $100,000 so Catholics on both sides of the Mississippi River have been asked to raise the remaining $40,000.
Dougal Nelson, director of development for Habitat for Humanity Quad Cities, said the purpose of the build is threefold:

— To honor Pope Francis for his commitment to social justice and reinvigorating the Catholic Church;

— To provide a unifying, celebratory opportunity for both Catholic and non-Catholic volunteers to work together toward a common goal; and

— To further Habitat’s mission of building and preserving homes.
Pope Francis Houses have been or are being built across the country. In the Quad Cities, the two-story home is located at 902 Tremont Ave., in Davenport.

“When we looked at the opportunity, we needed another home on the Iowa side,” said Nelson. Habitat has four more houses under construction — two in Davenport and two in Moline.

“For me the whole unifying part of this is so important, bringing Catholics and non-Catholics together for this goal,” he told The Catholic Post. “Sometimes we get divided and we only think one way, but this can open our eyes and show us that religion is alive and well in this country.”

CREATING MEMORIES
The Pope Francis House is one of two houses under construction on Tremont Avenue in Davenport and will go to Avita Hicks and her two daughters.

Hicks really didn’t know much about Pope Francis when she learned she would own that particular home, but she admires the warmth and friendliness of the people she has met while working on her home and that of her neighbor, Tanisha Garcia. Among those who attended the groundbreaking on May 2 was Bishop Martin Amos of Davenport, who gave her a hug.

“Sometimes when you’re going through life and working, I know it’s easy for me to say, ‘I’m exhausted.’ But to come out and volunteer, it’s a different feeling. I’m so grateful,” Hicks said.

Hicks, who is employed by FedEx, has been working with Habitat for two years to reach her goal of home ownership. She has put in 250 hours of “sweat equity” and is at the build site every Saturday — and sometimes during the week.

“The most important part is for my kids to have a decent home, to have somewhere we can always come back and have Thanksgiving and Christmas and celebrations and barbecues,” she said. “I was never able to do that in an apartment.”

Hicks grew up in the area and her mother lives near the Pope Francis House. Not only will her daughters be able to visit their grandmother easily, but they won’t have to change schools.

“THEOLOGY OF THE HAMMER”
“I think of every house as a special build — it doesn’t have to have the Pope Francis name on it,” said Samantha Sharp, student volunteer coordinator for the Habitat for Humanity Club at Alleman High School in Rock Island. The club regularly sends work crews to Habitat sites in the Quad Cities.

“I feel like it’s a good club to be involved in,” Kyle Barkalow, club president, told The Post. “It gives back to the community. With some of the service projects you don’t get to see what you’re giving back. This one is rewarding.”

Now in its third year, the club is moderated by Elizabeth Thompson, who has taught math at Alleman for 11 years. She is a Habitat partner family and is purchasing Habitat Home No. 25 in Moline.

“He had this idea called the ‘theology of the hammer,'” Kantner explained. “His idea was pretty comparable — to bring people from all different backgrounds together and in doing so they find what they share is more important than any of their differences. . . . It’s all about using the hammer to manifest God’s love and help folks.”

Among the Catholic communities that are providing financial support for the Pope Francis House is St. Mary Monastery in Rock Island. Sister Sandra Brunenn, OSB, said the Benedictines regularly make contributions to Habitat for Humanity and are happy to be a participant in this particular build.

“We think it’s a wonderful way to recognize Pope Francis’ strong commitment to support people who are most in need,” she said. “We are delighted to share our resources to make it happen.”