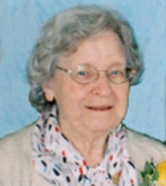 ROCK ISLAND — Sister Michelle Rheinlander, OSB, who ministered as an educator, community health nurse, pastoral minister, and former Scripture columnist for The Catholic Post, died on Aug. 29, 2015, at St. Mary Monastery. She was 93.

A Mass of Christian Burial was celebrated on Tuesday, Sept. 1, in the chapel of St. Mary Monastery. Burial followed in Calvary Cemetery in Rock Island.

Born on May 15, 1922, in St. Louis, Sister Michelle was the daughter of Arthur and Dorothy (Groff) Rheinlander. She attended St. Thomas Grade School and Resurrection School there and St. Mary’s Academy in Nauvoo.

She would go on to earn a bachelor’s degree from St. Scholastica College in Duluth, Minnesota, and a master’s degree in education from the University of Illinois in Urbana-Champaign.

She also worked in the Catholic Schools Office of the Diocese of Peoria from 1968 to 1973, serving as associate superintendent and superintendent of schools, and was pastoral associate at St. Mary Parish in Moline from 1994 to 2006. She wrote Scripture reflections for The Catholic Post from 2006 to 2008.

In addition, Sister Michelle was director of Casa Kinder in Santa Clara, Mexico, for two years and served as public health supervisor and community health nurse with Native American groups in Arizona from 1973 to 1994.

Sister Michelle was preceded in death by her parents; three sisters, Dorothy Kubik, Sue Tarbi and Nan Tittle; and one brother, Arthur Rheinlander. She is survived by one nephew, John Tittle, and her Benedictine Sisters.