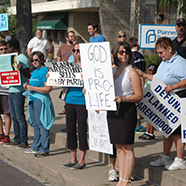 Photo Caption: Brittney Morales, a member of St. Philomena Parish, Peoria, and one of 200 taking part in a protest of Planned Parenthood in Peoria, holds a sign that reads “God is Pro-Life.”

Colleen Herzog had just explained why she had a smile and a wave for every passing vehicle on Jefferson Street outside of Planned Parenthood’s health center Saturday morning when a harsh voice came from a passenger in one of them.

“You guys all deserve to go to hell!” screamed a woman at Herzog and more than 200 others who had peacefully and prayerfully gathered Aug. 22 as part of a national day of protest against Planned Parenthood. In more than 200 cities around the country — including six in the Diocese of Peoria — people turned up in larger than expected numbers to raise awareness of Planned Parenthood’s involvement in abortion and allegations in a series of videos that the agency harvests and sells body parts of unborn children aborted at its clinics.

Herzog, a member of St. Mary of Lourdes Parish in Germantown Hills, shrugged off the verbal assault and continued to pray the rosary with a group of her friends.

“We’re not here to make enemies,” she told The Catholic Post. “We’re here to make friends.” The angry woman was the exception — many passersby gave thumbs-up signals or a friendly toot of the horn.

The protesters were also there to spread messages, verbalized in signs many participants carried that ranged from handmade to mass-produced.

Pete Martin held a sign on which he’d written in bold black letters “Watch Planned Parenthood videos online,” encouraging viewership of undercover reports by the Center for Medical Progress that have started a national discussion and spurred calls for government investigations.

“There are very serious legal issues that need to be investigated and prosecuted,” said Martin, a member of St. Philomena Parish in Peoria.

“We had a much greater turnout than expected,” said Amy Christensen of the more than 200 who took part in a protest outside Planned Parenthood’s center on Veterans Parkway in Bloomington.

“Our event was a silent, prayerful protest,” said Christensen, a member of the Sanctity of Life Committee at Epiphany Parish in Normal, which organized the gathering. “But it was not completely silent as the participants were glad to get acquainted with like-minded individuals.”

Each gathering lasted from 9 to 11 a.m., and Christensen said she was surprised the majority stayed on the sidewalk to the end.

Nearly 400 from the Quad Cities region took part in the protest at Planned Parenthood of the Heartland in Bettendorf, Iowa.

“I will remember the hundreds of peaceful people who came to pray, the unity of faiths under the pro-life banner, and the reliance on God that His people showed,” said organizer Jeanne Wonio.

At every reporting location, participants commented on the new faces they saw.

“There were several who found us through the Protest PP website and many of those said they had never done anything like this before,” said Christina Olar, who helped coordinate the protest in Pekin. “I think this is a great benefit from the protest — more people realizing they need to take a stand against the evil that Planned Parenthood is doing.”

The protest in Champaign was sponsored by the St. Matthew and Holy Cross parish respect life committees, while the gathering in Ottawa was coordinated by Illinois Valley Citizens for Life.