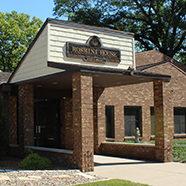 Photo Caption: The Rosmini House of Prayer is located at 2327 W. Heading Ave. in West Peoria.

Members of the Institute of Charity have been part of the spiritual fabric of the Diocese of Peoria from its very earliest days. Especially active in the Galesburg area, the Rosminians are credited with establishing Catholic education there.

Blessed Antonio Rosmini founded the Institute of Charity in northern Italy in 1828. At the time, Pope Pius VIII gave his blessing provided the community would begin “humble and on a small scale.”

Blessed Antonio had a broad interest in philosophy, science, politics and education, however, and the popes of his time encouraged him to keep writing about the ways that faith and reason intersect, according to Father William Miller, IC, vicar for the Rosminians in the Diocese of Peoria and pastor of St. Patrick and Corpus Christi in Galesburg and Sacred Heart in Abingdon.

The community’s crest shows a pelican encircled by the words “Legis plenitudo charitas” or “Love fulfills the law.” The pelican, which feeds its young with its own flesh, is a longtime symbol of self-giving that can be found in Christian art throughout the world.

“In terms of his writings, the most inspiring are the ‘Maxims of Christian Perfection,'” Father Miller said. “It goes back to the fact that we are all called to holiness, perfection and the kingdom of God.”

“UNIVERSAL CHARITY”
With a goal of “universal charity,” Blessed Antonio didn’t have a specific mission in mind for his priests. They were instructed to do what the bishops asked and “persevere as best we can.”

His “humble” community soon spread to other parts of Italy, England and Ireland, and early members were involved in parish work, according to Father Miller.

“The other thing that was unique is that he wanted his priests to be in the service of the bishops and diocesan clergy, so much so that he didn’t have a habit distinct from diocesan clergy,” Father Miller said.

In the Diocese of Peoria, the Rosminians serve as pastors at St. Matthew in Farmington and St. Patrick in Elmwood, as well as the Galesburg and Abingdon parishes. They also have a house of prayer in West Peoria that is used by local groups for Holy Hours and days of recollection, and have been involved in prison ministry.

In addition to his parish ministry and community responsibilities, Father Miller is the longtime chairman of the Diocesan Respect Life Board.

Leading the way for Rosminian ministry in central Illinois was Father Joseph Costa, IC, who came to Galesburg by way of El Paso, Jacksonville, Springfield, Bloomington and Lincoln. Sent for by Bishop John Lancaster Spalding, the Italian-born priest was named pastor of St. Patrick Parish in Galesburg in 1877, the same year the Diocese of Peoria was established.

Father Costa was charged with building a school and the cornerstone for St. Joseph Academy was laid in 1878. The doors opened a year later.
What followed was construction of Corpus Christi Church and Lyceum (high school), and St. Mary School for those who lived too far from St. Joseph Academy. Catholic education in Galesburg continues at the school that now bears his name, Costa Catholic Academy.

Before he retired, Father Costa planted the seeds for a Catholic hospital with Bishop Spalding. The Sisters of the Third Order of St. Francis of East Peoria rose to the challenge and established what is now OSF St. Mary Medical Center.

“We are happy to still be serving here, even though there are only a few of us,” Father Miller said. “We’re very much at home, serving alongside our brother priests.”

He added that the dialogue between faith and reason is far from over. Part of the issue is reminding ourselves not to apologize for bringing faith to the table.

“It’s not a privatization of the faith, but about how we think and live and view the world and all the issues of the world,” Father Miller explained. “We really have something to bring that is not at odds with reason, but is a light that shines on reason and illuminates it.”

“The Christian should remain perfectly at peace and full of joy at all times, trusting entirely in his Lord, however much events may seem contrary even to the good of the Church itself. However he must not cease to pray and beseech God that his will may be done on earth as it is in heaven — that is, that men may observe his holy law on earth as the saints do in heaven.”
Blessed Antonio Rosmini
from “The Maxims of Christian Perfection”