Joy as ‘Corpus Christi’ identity is embraced at Bloomington school 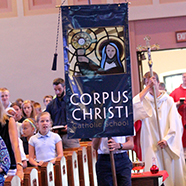 Photo Caption: A banner bearing the image of St. Clare holding a monstance is carried into church at the beginning of a Mass to open the year at the newly re-named Corpus Christi School in Bloomington.

BLOOMINGTON — Just when it seemed the first day of school couldn’t get any better, Msgr. Gregory Ketcham expressed the joy many of the students and teachers at Holy Trinity Church were feeling when he proclaimed, “Good morning, Corpus Christi School!”

The new name for Holy Trinity School was announced during Catholic Schools Week in January, and that identity as Corpus Christi, the “body of Christ,” was embraced as classes started Aug. 19. Principal Gwenn Roche was among those who wore a navy polo shirt with the new name and logo, the gym floor at the elementary building now lets people know they are at Corpus Christi Catholic School, and a banner bearing the image of St. Clare holding a monstrance and the school’s new name was carried into church at the beginning of Mass.

The students are still proud to be known as the “Saints,” however, and that’s what they’re at Corpus Christi School to become, according to Father R. Anthony Lee, who was the homilist for the Mass.

Father Lee said he hoped that by the end of the year the students would be able to say, “I learned a lot, but more than that, I now have the ability to love more, like Jesus loves.”

“This year, let’s help each other to love that we may not only be Saints by name, but saints with others’ needs,” he said.

The original intent was to establish a new parish around St. Clare School, but plans changed when the new growth in Bloomington happened closer to the airport and St. Patrick Church of Merna was established.

“The target year was 2017-18, but we are hopeful we can make that work for the 2016-17 school year,” Roche told The Catholic Post last week. “It would be a wonderful gift if we could do it a year earlier.”

The goal is to add eight classrooms, restrooms and storage space, she said. They also hope to reconfigure the library and computer lab to create a media center.

Roche said there should be significant savings by not having two campuses, so those funds could be applied to the cost of construction. “Within a very few years it should pay for itself.”

“We need to present that to the diocese. Once it’s approved, then we can begin to move forward,” she said.

Enrollment at Corpus Christi is 470. That includes 49 kindergartners, the largest kindergarten class the school has had in several years, and 120 children in preschool.