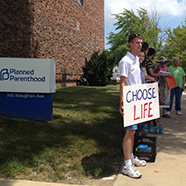 Prayerful, peaceful protests at regional Planned Parenthood affiliates around the Diocese of Peoria and across the nation are planned for this Saturday morning, Aug. 22.

The area protests — in Bloomington, Champaign, Ottawa, Pekin, Peoria, and the Quad Cities — are being coordinated by Catholic parish respect life groups as well as various pro-life organizations. They are part of a national day of protest to raise awareness of Planned Parenthood practices, including the harvesting and sale of body parts of unborn children aborted at the organization’s clinics. Participants may also voice objections to federal funding of Planned Parenthood.

Planned Parenthood has been the focus of a series of recent undercover videos produced by the Center for Medical Progress.

Mary Eppich, coordinator of Respect Life Ministry at St. Matthew Parish in Champaign, predicted Saturday’s events will be “the largest national protest of Planned Parenthood this country has ever seen.” Protests at more than 250 sites have been organized by a “ProtestPP.com” coalition headed by Citizens for a Pro-Life Society, Created Equal, 40 Days for Life, the Pro-Life Action League, and co-sponsored by 50 state and national pro-life organizations.

“Come out on Aug. 22, and bring your friends — especially those who haven’t been out on the front lines at an event like this before,” Eppich wrote in an email recruiting participants to a protest at Planned Parenthood’s Champaign Health Center.

The protests are scheduled from 9 to 11 a.m. Some will begin with a brief opening program. Participants are invited to bring their own signs and devotionals. The sites include:

OTTAWA: Planned Parenthood’s Ottawa Health Center, 612 Court St. Participants are invited to gather at 8:30 a.m. at the Jordan Block in Ottawa to organize, with the protest starting at 9 a.m. The Ottawa protest is coordinated by Illinois Valley Citizens for Life.

QUAD CITIES: Planned Parenthood of the Heartland, 2751 Tech Dr., Bettendorf, Iowa. Sponsored by The Helpers of God’s Precious Infants of Iowa, the protest will open with a brief program at 9 a.m. Parking is across the street behind the Women’s Choice Center or in the Heritage Church parking lot. Email woniojeanne@gmail.com for more information.

“At various key moments in our struggle against abortion, something happens that gives the American public a chance to see abortion — and the abortion industry — for what they are,” said Father Frank Pavone, national director of Priests for Life, which will have a presence at dozens of protest sites nationwide on Saturday.

“Now, with the undercover videos of Planned Parenthood,” continued Father Pavone, “”many realize for the first time that abortion is not the serene and innocuous thing that slogans made them think it was, and that Planned Parenthood is not the caring, service-oriented organization that its marketing masters make the public think it is. We are in a brief window of opportunity now to rouse ourselves and our fellow citizens to action.”