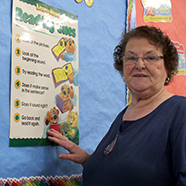 Photo Caption: “I love working with the kids. I don’t think I’ve ever had a day I didn’t want to come to school,” says Patricia Kawczynski of Holy Family School, Peoria.

Even after 50 years, Patricia Kawczynski still gets excited at the beginning of a new school year.

“From the time I was very little, I knew I wanted to be a teacher,” she told The Catholic Post while sitting in her Title I reading classroom at Holy Family School in Peoria. “I love working with the kids. I don’t think I’ve ever had a day I didn’t want to come to school.”

She has found many ways to remain involved in Catholic education over the last five decades, teaching every grade from first-graders to sophomores in high school. Her classrooms have played host to box turtles, which had free run of the room, and canaries that sang along with music lessons. At one time there was an aquarium filled with fish.

Kawczynski said she always tried to make her students excited about the world around them. “You can have fun and still learn.”

One thing that hasn’t changed is the faith and she has never budged on that, even when the students in religion class complained that it was “old fashioned.”

“It’s not old fashioned,” Kawczynski told them. “Truth is truth, no matter how long it has been going on.”

And the goal remains the same.

“Between the parents and the school we help each of their children develop a strong personal relationship with Jesus and carry that spiritual life with them. Hopefully they will continue to grow it,” she said, adding that not all lessons are taught with words.

“It’s not so much what you say, but what you do and who you are,” Kawczynski explained. “They may not remember what we taught, but hopefully they remember we were kind, we were loving, we were just and that we cared about them and we shared our faith with them.”

BEST OF BOTH WORLDS
Kawczynski’s teaching vocation came with a vocation to religious life with the Sisters of St. Joseph of Carondelet for the first 12 years.

She encountered the community when the Sisters came to teach catechism to the children at St. Edward Parish in Chillicothe. There was no Catholic school there at the time, so she also took the bus to St. Mary’s Cathedral School in Peoria.

The Sisters of Christian Charity at St. Gregory High School on Chicago’s north side also had an influence and by senior year one of the Sisters told her, “You ought to be thinking about religious life.”

Kawczynski entered the Sisters of St. Joseph of Carondelet in 1959 and credits them with giving her a firm foundation in religious practice and knowledge of theology. She received her bachelor’s degree in education from Fontbonne College, which is sponsored by the religious community, and spent her first years as a teacher at Catholic schools in the St. Louis area and Chicago.

After her mother’s death, she left the community to return to the Peoria area to care for her father. She would go on to teach at St. Mary School in Kickapoo and Sacre Coeur School in Creve Coeur.

Kawczynski married her husband, Richard, in 1975, the same year she started her master’s degree in administration at Illinois State University. They have four sons.

She has been principal of Sacre Coeur and Holy Family in Peoria, and worked as associate superintendent and superintendent of Catholic schools for the Diocese of Peoria. Stepping down in 2005, she returned to Holy Family, her home parish, as a substitute teacher and helped out when the principal was out of the building.

Three years ago, Kawczynski became the Title I teacher for reading at Holy Family. In that capacity she helps low-income students who are below grade level or who are struggling, starting in kindergarten. She works in the mornings from Monday through Thursday. That leaves her free to substitute in the afternoons and tutor on Fridays.

The funds for her program come through Peoria District 150, but she is teaching in a Catholic school and calls it “the best of both worlds.”

“There’s nothing better than seeing those little kindergartners catch on and get that look on their face, ‘I’ve got it now!’ or ‘Look, I can read! I read that whole sentence,'” Kawczynski said.

As for retirement, that’s not on the horizon just yet.

“I’m hoping I have another five years here,” she said. “I’d like to make it to 55 years. That would round things off nicely.”