New teachers at schools of diocese are welcomed, inspired 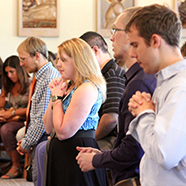 Teachers eager to start their first year in Catholic schools around the Diocese of Peoria recently had an opportunity to slow down, take a deep breath and reflect on the most important lessons they would teach their students.

“The church’s mission is one of salvation and it is an instrument of salvation. Evangelization is about bringing those entrusted to our care into an encounter with Jesus Christ,” Dr. Sharon Weiss, superintendent of Catholic schools, told the new teachers gathered at the Spalding Pastoral Center in Peoria on Aug. 3.
“That what’s your role is — not only to teach your subject, but you are very significant in letting them know who Jesus Christ is.”

That doesn’t mean the Catholic schools in the Diocese of Peoria aren’t academically rigorous. Weiss said that after a three-year study they know diocesan schools outscore all the schools around them and the church expects nothing less than excellence.

“But as Bishop Jenky says, ‘If they’re not authentically Catholic, then why do we have them?’ We’re not just private education. We’re faith based,” she said. “That’s what you signed up to do as a teacher in these schools.”
College is a worthy goal, Weiss said, “but we want to get them to heaven as well.”

She called teaching a vocation and said they weren’t there by chance.

“I believe you’re here because the Holy Spirit wanted you here,” she said, thanking them for saying “yes” to the Spirit’s call.

To give them a foundation for preparing their students for school Masses, Msgr. Brian Brownsey, pastor of St. Mark Parish and chaplain for the St. Joseph Newman Center at Bradley University in Peoria, celebrated an “explanatory Mass” for the new teachers.

There are 44 schools in the Diocese of Peoria — 37 elementary schools, five secondary schools and two academies that enroll students in preschool through high school. There are 11,000 students and 950 teachers.

In the Chicago Province there are 500 schools, enrolling 165,000 students and employing 10,000 teachers. Sanderson said Catholic schools provide a savings of more than $1.5 billion each year to Illinois taxpayers.

Catholic schools in the Diocese of Peoria are a system of schools rather than a school system, Sanderson said.

“In the Catholic Church we believe in the principle of subsidiarity, which means decisions are best left at the lowest level possible,” he explained.

The purpose of the Office of Catholic Schools is “to provide oversight and assistance” to school principals, pastors and education commissions and other advisory commissions, according to Sanderson.