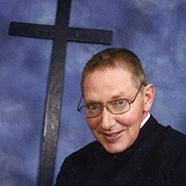 Father Joseph, who served the parishes since his ordination to the priesthood in 2001, died on Wednesday, Aug. 5, 2015 in the Emergency Room at OSF St. Mary Medical Center in Galesburg. He was 54.

Born Sept. 8, 1960 in Newport News, Virginia to William and Carolyn (Hertzler) Presley, Father Joseph joined the U.S. Army in 1984 and was honorably discharged in 1989.

He made his profession of perpetual vows with the Institute of Charity (Rosminians) on Sept. 29, 2000. He was ordained to the priesthood by Bishop John J. Myers on May 26, 2001, celebrating his first Mass the following day at Corpus Christi Church in Galesburg.