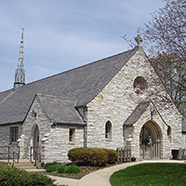 Photo Caption: The present St. Louis Church in Princton was dedicated in 1951.

PRINCETON — Bishop Daniel R. Jenky, CSC, will join members of St. Louis Church here for Mass on Sunday, July 26, as they celebrate the parish’s 150th anniversary. It will begin at 10:30 a.m.

The celebration will continue in the parish hall, 616 S. Gosse Blvd., after the liturgy. A fried chicken family feast is planned in remembrance of all the chicken dinners held to raise funds to build the church and will include desserts made by the Council of Catholic Women and sweet corn provided by the Knights of Columbus.

In addition, there will be games for children and adults, and a registration table for alumni of St. Louis School, which is celebrating its 50th anniversary this year, and former parishioners.

The celebration caps a year of special events, including an appreciation dinner in April and a parish picnic hosted by the Knights of Columbus in June.

HANDING ON THE FAITH
St. Louis Parish was founded in 1864 and Catholics met for Mass in the home of Mr. and Mrs. Andrew Gosse until a small frame church was built in 1865. The new faith community would be served by priests from LaSalle, Mendota, Sheffield and Tiskilwa until Father James Dollard was named the first resident pastor in 1910.

The church had been moved and enlarged to meet the demands of a growing Catholic population, and under Father Dollard a rectory was built. He would also oversee the building of St. Margaret Mary Church in Wyanet, which was a mission of the Princeton parish as was St. Francis Xavier in Bureau.

Construction began on the current church, an English-style Gothic structure, in 1949. The first Mass would be celebrated there on Christmas Eve in 1950, and Bishop Joseph Schlarman dedicated the new church on June 17, 1951.
Plans for a school started soon after Father James P. Culleton was named pastor in February 1960. Staffed in large part by the Sisters of Mary of the Presentation, St. Louis School opened its doors in September 1964 and was blessed by Bishop John B. Franz the following May.

A kindergarten and new library were added to the school in 1978, while Father Richard Kolczaski was pastor. Enrollment expanded to include eighth grade in 2000 and preschool students were welcomed in 2005.

Father Edward Harkrader oversaw construction of a parish hall in 1998 that connected the church and school and now bears his name.

In addition to converting the convent into a preschool at the request of the parishioners, Father Jeffrey Stirniman, the current pastor, supported efforts to establish a Life Garden near the Mother’s Chapel.

In the future, parishioners hope to build a greenhouse to provide lessons in botany, biology and horticulture for the students and food for the local pantry. The kitchen in the parish hall is also being renovated to expand its use.

For more information about St. Louis Parish and School, visit the parish website.