Jubilarian priest ‘heroes’ are celebrated and thanked at Mass 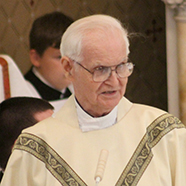 They may not grace the covers of comic books or star in blockbuster films, but jubilarian priests of the Diocese of Peoria were celebrated as “heroes” to the priesthood, the faith and the church during a Mass at Sacred Heart Church in Peoria on June 25.

Bishop Daniel R. Jenky, CSC, gave thanks for their ministry and led the applause for the jubilarians after they were recognized by Msgr. Paul Showalter, vicar general of the diocese. The priests, women religious and lay people also showed their appreciation for the six men ordained for priestly service on May 23: Father Joseph Baker, Father Eric Bolek, Father Adam Cesarek, Father Matthew Deptula, Father Alexander Millar and Father Jacob Valle.

In his homily, Canon John Flattery of Danville recalled his own ordination 60 years ago, as he lay prostrate on the “hard terrazzo floor of the Chapel of St. Turibius at the Josephinum” in Columbus, Ohio.

“I remember the sacramental imposition of hands, the melodious Latin of Archbishop Amleto Giovanni Cicognani, then apostolic delegate to the United States, as he prayed over us and invoked God’s blessing on our priesthood,” he told those assembled before him. “Then with him we concelebrated our first holy Mass as priests of Jesus Christ.

“It is that ordination to the priesthood that we all celebrate today. In it we accepted not only the challenge to be ambassadors for Christ, but also, with the grace of God, to become an alter Christus, another Christ,” Canon Flattery said.

He shared how he was able to be that ambassador for Christ in his parish assignments in central Illinois, as well as his 28 years of service as a chaplain in the United States Air Force. Throughout his travels, he was struck by “the continuity of the one, holy, catholic and apostolic church.”

HIGH STANDARDS
While he encouraged the day of celebration, which included a dinner hosted by Bishop Jenky at the Spalding Pastoral Center, Canon Flattery asked his brother-priests to consider: “How well am I personally doing as an ambassador for Christ? And where am I with the challenge of becoming an alter Christus, another Christ?”

“St. Paul has set a standard for us, a very high standard,” he said, quoting the saint’s letters to the Philippians, “Let that mind be in you which was in Christ Jesus,” and Galatians, “I live, now not I, but Christ lives in me.”

“These are our goals. With the grace of God and our cooperation, may we all continue to strive to attain them day by day,” he said.

In addition to Canon Flattery, those celebrating 60 years of ordination are Father Richard Mullen and Father John Waugh.