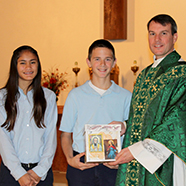 Photo Caption: Father David Richardson receives a “box of prayers” from the students at St. Philomena School in Peoria. School families sign up for a week and pray for his intentions every day.

Father David Richardson and Jodi Peine had an agreement — neither would nominate the other for any awards or special recognitions. Despite that, two of the highest honors bestowed by the diocesan Office of Catholic Schools came their way.

“He’s one of the few people in the world who can provide spiritual counseling, who can fix your computer, turn the locks on in the church — and off — and adjust the heat in the kindergarten classroom all while he’s standing in your office, basically at the same time. He’s the master of multitasking,” Peine said of Father Richardson during the recognition ceremony. “We love him dearly. Thank you, Father.”

Uncomfortable with the attention, Father Richardson keeps his eyes fixed on what matters most.

“The main point of Catholic education is we’re trying to train saints. We want them to get to heaven,” he told The Catholic Post in the days following the celebration. “We’re desiring that they learn who Jesus Christ is and they learn that they came from God and they’re going back to God. That life is about understanding that we’re loved by God . . . and we love in return.”

Because everyone is called to do something with their life to serve God, Father Richardson added that they work hard to help the students explore their gifts and talents and grow in them academically, socially and physically. St. Philomena School is known for its arts program, as well as its science, technology, engineering and math curriculum.

“It’s amazing, when you have the arts going well, how much it enlivens the children, especially when they get floored by the fact that they did something they didn’t know they could do. It really is so good for the heart,” he said, noting that when this happens the students can begin to make life decisions.

This is possible because he and Peine are a good team, sharing a genuine friendship and respect, Father Richardson said.

That cohesion of their ministries is something people can see, according to Father Richardson.

COMPUTERS AND COUNSELING
Father Richardson is comfortable with technology and strives to make sure the curriculum can be supported by it. That affinity comes from his days at the University of Illinois, where he studied computer science.

While he hoped to make a career in computer technology, he began to hear another call after he met Msgr. Michael Bliss at St. John’s Catholic Newman Center. He was confirmed while a student at the University of Illinois and started discernment for the priesthood with Msgr. Bliss.

Eventually he attended a session of Emmaus Days and “got pulled in.”
When he felt his life’s vocation changing, Father Richardson changed his major to psychology. He said he does a lot of spiritual direction and counseling with people of all ages.

“I absolutely love the sacrament of confession, healing people and allowing them to grasp that Christ is always moving us to a new life and moving us forward, trying to help us to unbind from the sins and the mistakes of the past and live a new life,” he said.

Father Richardson was ordained on May 24, 2003, and served as parochial vicar at St. Matthew Parish in Champaign for three years. Assigned to St. Philomena in 2006, he was parochial vicar until 2008, when he was named administrator. He has been the pastor since 2009.

Father Richardson was assistant vocation director for the Diocese of Peoria from 2006 to 2009, and was named episcopal vicar for junior clergy in 2014.

He said he is grateful for the support of Bishop Daniel R. Jenky, CSC, who is an educator.

“Every time I talk to him about our school he’s always so positive and supportive and encouraging, and is a great advocate of education,” Father Richardson said. “I really see my ministry here . . . as serving him, serving the people. I am thankful for his trust and confidence.”