Cambridge catechist ‘learned along with the kids’ for 50 years 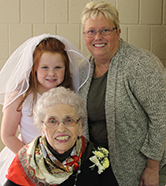 Photo Caption: Donna Dobbels poses with a student from her first class, daughter Julie Dwyer, and her last student, Olivia Brown, who received her First Communion on April 26.

CAMBRIDGE — As a new Catholic, Donna Dobbels was invited to help prepare the children of St. John Vianney Parish for their First Reconciliation and First Communion so she could “learn along with the kids.”

Mrs. Dobbels retired this spring after watching Olivia Brown receive her First Communion on April 26. Both were honored at a breakfast hosted by the parish’s Altar and Rosary Society.

“I just always enjoyed working with the little children,” said the longtime catechist, who will turn 80 on June 12. “It’s important they should learn about God. Receiving Communion, going to church is very important.”

“It wasn’t work for her, it was fun,” said her daughter, Julie Dwyer, who was in the first class her mother taught and is now president of the Altar and Rosary Society. “She enjoyed making sure they had everything.”

Over the years, Mrs. Dobbels prepared the children of her first students — including her grandchildren — for this special moment in their lives and was starting to see a third generation. Each year the experience has become more personal as the class sizes have gotten smaller.

“We always told them it doesn’t matter if it’s one child or six children. Everything is going to be the same for them,” Mrs. Dobbels told The Catholic Post. That includes choosing an apostle to study and making a banner.

“It’s amazing what they come up with,” she said of the banners. “The parents help with that. That’s something they do together. We always have that on display on the altar on their First Communion day.”

REPAYING DEBT TO GOD
Raised as a Methodist, Mrs. Dobbels came into the Catholic Church when her second daughter was born because “I decided it was better to raise the children that way.”

When she was first married to her husband, Robert, they farmed on land given to them by his father and attended St. John the Apostle in Woodhull. They moved to her grandfather’s farm in rural Cambridge when the new church was being built there and Robert served on the board for the construction.

While she always considered the sacraments an important part of her life, Mrs. Dobbels gained a new appreciation when she became seriously ill in 1967. At one point, the doctor didn’t expect her to live through the day.

Her husband prayed all night for her recovery and she survived. Eventually she was diagnosed with Addison’s disease, a rare disorder that affects the adrenal glands.

“I always said God was the one who saved me and I needed to teach other people,” she said. “I owed it to him to do something.”

In addition to bringing that strong faith into the classroom, Mrs. Dobbels has been able to offer the students what she learned from trips to Fatima and the Holy Land. The Dobbelses also celebrated when their daughter, Becky, entered the Congregation of the Humility of Mary, which is based in Davenport, Iowa. The congregation has remained close to the family since Sister Becky died in 2007.

The Dobbelses retired from farming in 1994, and their son, Lanny Dobbels, and his son farm the land now. Her retirement as a catechist won’t slow her down much, however. She still volunteers at the county nursing home and has been involved in the Farm Bureau Women’s Committee for several years.

There are also seven grandchildren and four great-grandchildren to enjoy and another milestone to look forward to, Mrs. Dobbels said. She and Robert will celebrate their 60th wedding anniversary on Sept. 17.

“I’m glad I got to do all these things,” she said.