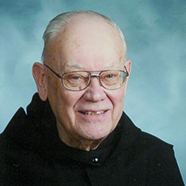 Photo Caption: Abbot Roger served as the sixth abbot of St. Bede Abbey in Peru from 1990 to 2003.

His body was received at the St. Bede Abbey Church at 4 p.m. on Tuesday, May 26. Abbot Philip Davey, OSB, was principal celebrant of the funeral Mass, with interment in the abbey cemetery.

NATIVE OF PERU
Born July 14, 1930, in Peru to Francis and Honorine Corpus, he was named Francis after his father. He had one sister, Charlene, and he remained very close with her and her family throughout his life.

He entered the monastic community in 1950 and professed vows on July 11, 1951, taking the name Roger. Two years later, he earned a bachelor’s degree from St. John’s University in Collegeville, Minnesota, and then returned to St. Bede for four years of theology studies.

He was ordained to the priesthood by Bishop William Cousins on June 2, 1957.
From 1957 to 1990 he taught English, photography and film making at St. Bede Academy and earned a master’s degree in communication arts from the University of Notre Dame during summer sessions.

As a teacher he was known as being patient and gentle, but also demanding. Former students often spoke of his influence in helping them “see with a photographer’s eye” and to view films as more than mere entertainment.
In addition to teaching, Father Roger also served the Academy for periods as infirmarian, prefect of the boarding school, and moderator of the Mothers’ Club.

BENEDICTINE LEADERSHIP
In 1981 he was made prior of St. Bede Abbey, serving from 1981 to 1985. The following year he took part in a month-long monastic renewal program at Collegio Sant’Anselmo in Rome, and was then re-assigned as prior from 1987 to 1990.

On June 8, 1990, he was elected the sixth abbot of St. Bede, and was re-elected in 1998. During his tenure, development efforts for abbey and academy were integrated and revitalized.

To meet the responsibilities of leading the community, Abbot Roger further deepened his prayer life and increased his spiritual reading — especially the works of Cardinal Basil Hume, which he found very helpful.

“I felt the need for the Holy Spirit more with the decisions that had to be made,” he told The Catholic Post in 2014, whether they involved St. Bede Academy, normal maintenance of the facility, or “telling men what they will or won’t do” in various assignments.

When he resigned as abbot in 2003, Bishop Daniel R. Jenky. CSC, appointed him administrator of St. Mary Parish in El Paso. He was named pastor two years later. Despite having very limited experience in pastoral administration, he was successful in creating a strong parish community. Parishioners were especially grateful for his ministry to the sick and for his comfort and compassion during times of struggle or tragedy.