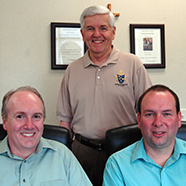 Photo Caption: Jim Stolt (standing) has retired from the Office of Finance. Mike Buckley, left, has been named director of diocesan finances; Russ Courter will be director of parish and school finances.

Bishop Daniel R. Jenky, CSC, has announced a new division of duties in the diocesan Office of Finance following the retirement of Jim Stolt as director on May 1.

Mike Buckley and Russ Courter have been hired for the newly created positions of director of diocesan finances and director of parish and school finances, respectively. Both are certified public accountants who formerly worked at the Clifton and Gunderson accounting firm.

Buckley is a 1990 graduate of Illinois Weselyan University in Bloomington. He began his career at Clifton and Gunderson that same year, and later worked at a private company where he served as controller for 12 years. In 2006, he returned to Clifton, assisting in their small business department. He lives in Peoria with his wife Laura. The Buckleys have two children.

Courter is a 1988 graduate of St. Ambrose University in Davenport, Iowa. During a 27-year career at Clifton and Gunderson, he supervised numerous non-profit audits including the audits of Catholic Charities of the Dioceses of Peoria and Springfield. He lives in Brimfield with his wife, Rhonda. They have two children.

OVERSAW TRANSITIONS
Stolt, also a certified public accountant and former chief financial officer for Cottage Hospital in Galesburg, joined the diocesan staff in the spring of 2008. Prior to being named director of finance in 2012, he served as an internal auditor, assisting the diocese and its parishes and institutions with financial reporting, internal controls, and policies. He worked closely with Catholic Charities of the Diocese of Peoria during its period of major transition.

In 2012, he led the evaluation and selection of new software technology to establish a standard accounting platform for parishes and schools. Completing the implementation of the accounting system, known as ParishSOFT, and using the information available will be done more effectively with directors of finance responsible for the two different areas, he told The Catholic Post. The new structure will also provide more opportunities for the training of existing and new employees.

Stolt expressed gratitude for the “dedication and effort of my colleagues.”

“I was blessed with a great team of people to work with that made each of the changes and improvements we initiated manageable,” he said.

Patricia Gibson, director of the curia, thanked Stolt for his “hard work and dedication.” Stolt and his wife, Susan, reside in Galesburg. Dr. Susan Stolt continues as associate superintendent of schools for the Diocese of Peoria.