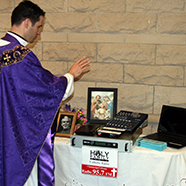 URBANA — Peggy Price has advice for those who feel God is asking them to do something they believe is impossible.

“Just say ‘yes’ to God,” said Price, a member of St. Matthew Parish in Champaign and the president of a new non-profit charitable corporation that has helped bring a Catholic radio station to Champaign-Urbana. WLHF-LP began broadcasting EWTN programming at 95.7 FM on Friday, April 24, when its antenna was placed high on a tower along Neil Street in Champaign.

“You can do the ridiculous and the impossible with God,” said Price. Still, when she first felt God asking her to start Champaign’s first Catholic radio station a few years ago, Price acknowledges “I told him that was a silly idea for an older woman in a wheelchair with no money.”

But the urging kept coming back in prayer. So Price called the Diocese of Peoria and was eventually connected with Allen Drake, the driving force in bringing Catholic radio station WPMJ-FM to the Peoria-Chillicothe region in 2009. Drake told Price initial steps to be done, including making sure a frequency was available and then forming a non-profit charitable corporation. He has been a key collaborator throughout the start-up process.

“I couldn’t ask for anybody better to work with,” said Price of Drake.

The charitable corporation managing WLHF is called Trinity Educational Association, Inc. It includes Price as president and her cousins Judy Weber-Jones and Joan Colwell, who serves as treasurer.

TO BUILD UP FAITH
WLHF is a low-power FM station, with a coverage area of the metropolitan area of Champaign-Urbana. It will be promoted as Holy Family Radio.

“We talked about several names,” said Price, “but we felt like right now the family is being attacked, and marriage is being attacked, so we decided to name it Holy Family Radio,” hence the “HF” in the call letters. The “WL” were assigned letters, but Price added “the ‘L’ has always been ‘love’ to us.”
Programming from EWTN radio includes talk shows, children’s programs, teaching series, and live coverage of church events.

“I can’t tell you how much it has built up my faith,” said Price of ETWN television and radio. “I wanted that for everyone in Champaign-Urbana.”
Drake estimates it will cost about $20,000 a year to run the station. Price’s brother, Tom Weber — a retired electrician — assisted with wiring and will help keep it on the air.

Donations to support the station may be sent to Price at 1802 E. Amber Lane, Apt. 103, Urbana, IL 61802. Make checks payable to Trinity Educational Association. More information is available on the station’s website, catholicradiocu.com.

WLHF joins other Catholic radio stations heard in the Diocese of Peoria including WSOG 88.1 FM in Spring Valley and 94.7 FM in the El Paso and Hudson areas; WPMJ 94.3 FM in Chillicothe/Peoria; WSPI 89.5 FM in Ellsworth/Bloomington; KTJT-LP 102.7 FM in Davenport, Iowa, and WRMS 790 AM in Beardstown.