Deacon Matthew Deptula: ‘God calling me to something more’ 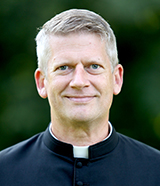 Deacon Matthew Deptula had everything the world told him he needed — a house, two cars, a TV in every room, and plenty of money. An early “evangelist” in the wireless data industry, he also was on track to meet his goal of being a vice president by the time he was 40.

But it didn’t make him happy.

“It was during this time when things got really quiet,” he said, pointing to 1 Kings 19. God did not come to the prophet Elijah in the storm or the earthquake or fire, but in a “still small voice.”

“That’s what happened to me,” Deacon Deptula said.

Born in New York and raised in Florida, he came to Illinois by way of Loyola College in Chicago, where he studied psychology. Like many other college students, he started to drift from the practice of his faith and by the time he was back in Florida and starting to think of a career in sales, he was a “Christmas and Easter Catholic.”

There was never a time that he was unaware of God’s presence in his life, however. He said his pride kept him from returning to church, but when he finally heard that “still small voice” it was time to listen.

“The sacrament of reconciliation was a large part of my journey back. You don’t go that far of the beaten path without a desperate need for God’s mercy,” Deacon Deptula, 42, told The Catholic Post.

“I remember my pastor at the time, who was my spiritual director while I was discerning, telling me once that the sacrament of confession is the sacrament of not giving up,” he said. “It’s so easy to say, ‘I’m tired of asking for forgiveness,’ but as Pope Francis says, ‘God never tires of giving us his mercy. We tire of asking for it.'”

While he was sorting things out, Deacon Deptula got involved in pastoral ministry to the sick, read books written by the saints, and let God work on his heart. He was also assisting as a sacristan at his parish and serving as an extraordinary minister of holy Communion.

“Maybe I was just being called to be a benefactor, the good Catholic guy who put a new roof on the school,” he said. “I started to realize that God was calling me to something more.”

Torn about whether to study for the priesthood in Florida, where his parents lived, or Illinois, where his brothers lived, he opted to apply to the Diocese of Peoria. He credits “God’s abundant mercy” for making it possible for his parents, Stan and Betty Deptula, to buy a house in Peoria, and split their time between the two states.

He entered Mount St. Mary Seminary in 2009 for pre-theology studies.

And his experience as “evangelizer” of wireless data? He intends to put that to good use, too.

“The days of the ‘shop keeper church’ are over,” Deacon Deptula said, referring to the New Evangelization the church is involved in. “We can’t just open the doors and expect people to come.”