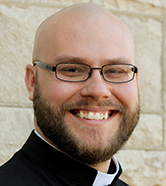 Deacon Erik Bolek is the picture of calm as ordination day approaches.

“I’ve already made a promise to God, and now I’m fulfilling that promise,” he told The Catholic Post.

While friends getting married this year sometimes seem “all stressed out” as they wedding plan, “I have no stress whatsoever,” said Deacon Bolek. “It has been a joyful and truly wonderful time these last five months. It’s all come together perfectly, so I’m just looking forward to the day now.”

A native of Holy Trinity Parish in Bloomington, Bolek recalled three “profound encounters with Jesus” in the Eucharist that helped set him on the path to the priesthood.

The first occurred in the summer prior to becoming a freshman at Normal Community High School. It came during a Mass at a Catholic HEART Workcamp in Minnesota he took part in with a group from his parish.

“At the elevation of the Eucharist was the first time it crossed my mind this is really Jesus Christ, and he did all these things for me,” recalled Deacon Bolek, the son of Joseph Bolek and Mary Morales. Two years later, while attending an Emmaus Days vocations retreat, there was another personal encounter during adoration of the Blessed Sacrament, and it happened again at a morning Mass during the final day of a visit to Immaculate Heart of Mary Seminary in Winona, Minnesota.

He began going to Mass and confession more frequently and, by the time he graduated from high school in 2007, Deacon Bolek knew it was time to give the seminary a try.

“I would never be this free again to try it,” he reasoned.

His seminary years in Winona and later at Mount St. Mary in Emmitsburg, Maryland, would confirm his vocation. He took a year away his second year, enrolling at Illinois State University. He “got to grow up quite a bit, see what the real world is like” and took girls on dates. But Deacon Bolek considered it a sign that on the dates he realized “I’d rather help you get to heaven but not by me walking next to you.”

By his second year of theology in Emmitsburg, he was completely sure of his call to the priesthood and “from that point on seminary was different for me.”

That certainty, the fraternity he already feels with classmates and many priests of the diocese, plus “the joy I was able to experience on the day of my ordination for the diaconate,” all lead to the feeling of peace he feels as ordination approaches.

If his first assignment involves a parish school, Deacon Bolek looks forward to greeting the children daily as a “spiritual father” in a practice he has heard Father Dustin Schultz, now at St. Vincent de Paul Parish in Peoria, speak excitedly about.

“To be the first face they see walking in, the last face walking out,” said Deacon Bolek. “It takes all of 20 minutes.”