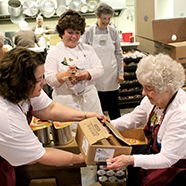 Photo Caption: Amy Frakes (left) and Angela Kenny (right), both of Peoria, work with Colleen Murphy of Pekin to sort and date food at Sophia’s Kitchen in Peoria.

For a ministry that is rumored to be closed, Sophia’s Kitchen had a lot of activity going on both inside and outside the parish hall at St. Joseph Church in Peoria on a recent Wednesday afternoon.

While more than 200 homeless and underemployed people outside walked away with a nutritious sack lunch, volunteers inside the building were busy sorting, dating and storing food received from the Peoria Area Food Bank. Among them were alumni of Saint Mary-of-the-Woods College, who were taking part in a day of service in honor of the 175th anniversary of the Sisters of Providence and their school.

“There is some confusion out there. We were closed for a short time when we had the dishwasher renovation, but we’re open again and feeding about the same number of people we did last year,” said Claire Crone, manager of Sophia’s Kitchen and director of the Sacred Heart Sandwich Program that operates there.

She said some also mistake them for the Missionaries of Charity soup kitchen, which had been located in the parish hall of St. Mary’s Cathedral. That ministry has been discontinued, according to Msgr. Stanley Deptula, rector of the cathedral and director of the diocesan Office of Divine Worship.

He said the regional superior of the Missionaries of Charity met with Bishop Daniel R. Jenky, CSC, in mid-December to talk about closing the soup kitchen. The religious community felt it was a duplication of other efforts in downtown Peoria.

“This will free the Sisters up to focus on their catechetical ministry, which has been enormous for the cathedral parish, and they do door-to-door ministry — street evangelization,” Msgr. Deptula told The Catholic Post. “They still provide a food pantry.”

He explained that the change was a “Holy Spirit moment” since the building they used was “approaching crumbling. We didn’t know what to do with that building if the Sisters had continued.”

He acknowledged that another area of concern has been the fate of Sacred Heart and St. Joseph now that the Friars of the St. John the Baptist Province are returning pastoral care for those faith communities to the Diocese of Peoria.

“The diocese is committed to all that Sacred Heart is and all that St. Joseph is, including (the Sandwich Program),” Msgr. Deptula emphasized. “They are not closing. . . . People love Sophia’s Kitchen. It’s a huge ministry.”

HAPPY TO SERVE
Crone said the number of people served by Sophia’s Kitchen fluctuates with the seasons, but not the way most people think.

“I thought we would be feeding more people in the wintertime and it’s the exact opposite,” she said. “A lot of it has to do with the school children getting out for the summer. They don’t have the money to feed the children. In the summer, one-third of our clients are children.”

While many of the people they see each day have jobs, they can’t make ends meet, Crone said, noting that all it takes is an unexpected medical bill or car repair. She also has seen an increase in the “truly homeless.”

There are more helping hands, too. Crone now has two assistant managers, Sister Vilayphon Santibout, OSF, and Courtney Curtis. They oversee 110 regular volunteers, as well as students from area schools and members of the community who want to donate their time.

“We’re ready to be the only Catholic soup kitchen in Peoria,” she said. “We want to represent the Catholic population for those who need help, to carry on the traditions of giving and caring that Catholics are known for.”