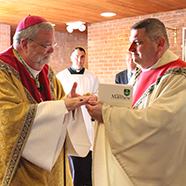 Photo Caption: Father Robert Rayson, pastor of St. Matthew Parish in Champaign, presents Bishop Jenky with keys to the church during Introductory Rites at the Rededication Mass on April 16.

CHAMPAIGN — What began as a project to move the tabernacle to the center of the sanctuary became a major renovation at St. Matthew Church with the goal of “reorienting us to the divine.”

The opportunity to experience that for the first time came April 16, when Bishop Daniel R. Jenky, CSC, consecrated and rededicated the church during a festive liturgy that was also a celebration of the faith community’s 50th anniversary. A banquet followed in Feeney Hall, where parishioners had been gathering for Mass since last June.

“The renovation and the reconstruction of this parish church is a wonderful moment to remember, to give thanks for the past of this faith community,” Bishop Jenky told the people who filled every pew. “But it is also a graced opportunity to look to the future, to recommit, to renew and rededicate your lives to a personal relationship with the Lord Jesus Christ, to the truths of Scripture and tradition, and to the demands of Catholic practice.”

He emphasized that “this truly magnificent sanctuary” was an outward sign of a “truly wondrous” inward reality.

“The splendor of this space that is to be consecrated is intended to remind everyone who enters here of the splendor of grace,” the bishop said, adding that they can’t keep that to themselves.

“At the end of Mass, after this privileged moment of worship together, we are . . . sent out to announce the Gospel. Remember, it is Christ who sends us outside the doors of this beautiful church to live what we say we believe,” he said.

“FRAGRANCE OF CHRIST”
Bishop Jenky would go on to bless the holy water that would be used to sprinkle the new altar, the walls of the church and the people gathered within. Pouring sacred Chrism on the marble mensa of the altar, he used his hand to spread the oil over every inch of it and then consecrated a wall of the church.

In a final sign of prayer and blessing, Bishop Jenky placed incense over hot coals in a bowl on the altar with the words, “Lord, may our prayer ascend as incense in your sight. As this building is filled with fragrance so may your Church fill the world with the fragrance of Christ.”

Concelebrating the Mass with Bishop Jenky were Father Robert Rayson, pastor; Father Matthew Hoelscher and Father John Cyr, parochial vicars; Father Joseph Hogan, vicar forane of the Champaign Vicariate; and Msgr. Paul Showalter, vicar general of the Diocese of Peoria. Joining them were Msgr. Mark Merdian, pastor when plans for the renovation started in 2010, and Msgr. Albert Hallin, co-pastor with Father William Feeney, who oversaw construction of the church.

Also filling the sanctuary were 13 priests who had served at St. Matthew or are assigned to area churches now.

Father Rayson thanked them all and Bishop Jenky, and showered praise on parishioners past and present for the sacrifices they made to build up the body of Christ and make the renovation possible.

The money was raised through the “Christ Our Life” capital campaign. The goal was $2.5 million, but parishioners pledged $2.8 million and more is being received, according to Father Rayson.

St. Matthew School also benefited from the project, with $450,000 set aside to replace classroom heating units and upgrade restroom facilities.