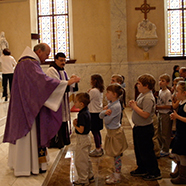 FOUNDED: 1859 in Cincinnati
MINISTER GENERAL: Father Michael Perry, OFM
PROVINCIAL MINISTER: Father Jeffrey Scheeler, OFM
MEMBERS: 170, six serving in the Diocese of Peoria
CHARISM: “To consider everyone as my brother and sister, no matter who they are, but especially reaching out to the marginalized, the needy and the poor, as Francis called us to.”
APOSTOLATES: Parishes, chaplaincies, preaching/retreat, teaching, publishing, evangelization, missions, and inner-city ministry.

“You guys have your feet in the dirt.”

Those words might raise eyebrows in general conversation, but they are music to the ears of Franciscan Friars like Father Gregg Petri, OFM, parochial vicar at St. Mary Parish in Bloomington.

“We are to preach with simplicity and joy . . . and with our lives,” said Father Gregg, a member of the Friars of St. John the Baptist Province, which is based in Cincinnati, Ohio.

“We walk with (people) and we’re there no matter who they are,” said Father Luis Aponte-Merced, OFM, parochial vicar of Sacred Heart Parish in Peoria. “We try to reach out to those in need, but it’s not just providing for them. We walk with them.”

“Our title, OFM, means the order of lesser brothers. St. Francis always wanted his brothers to be in the minority,” Father Larry Zurek, OFM, pastor of Sacred Heart Parish, explained.

“With Pope Francis calling the church to the peripheries, to the edges, that’s so Franciscan — to go where no one else goes, where the need is,” he told The Catholic Post. “I think in every one of our parishes there’s always been an emphasis on soup kitchens or some kind of programs that reach out.”

That’s true at Sacred Heart, which has had a sandwich program for the homeless and underemployed for many years. That ministry now operates out of Sophia’s Kitchen, located in the parish hall of St. Joseph Church.

St. Mary in Bloomington hosts the Loaves and Fishes Soup Kitchen, an outreach of Clare House. Meals are served from 11:30 a.m. to 12:30 p.m. on Tuesday and Thursday.

UNIVERSAL APPEAL
While people in central Illinois may associate the Friars with the parish ministry they have provided for more than a century in such places as Bloomington, Peoria, Metamora, Streator and Washburn, that is only one face of the community.

“We can be anything we can be as long as we live the Gospel and preach the Gospel,” Father Luis said, adding that St. Francis always intended the members of his community to be itinerant — going wherever they were needed.

These days, that means the province is returning pastoral care for the faith communities at Sacred Heart and St. Joseph to the Diocese of Peoria. Father Larry and Father Luis have been asked to do vocation work for their community, starting this summer.

“It’s not so much our ministries that drive what we do, it’s our life in common that dictates where we go and what we do,” Father Larry said. “The order has been calling us over the last several years again to the charism of brotherhood and prayer.”

Their habit, one of the most recognizable in the world, is in the shape of a cross. The cords tied around their waists are signs of their vows of poverty (“without anything of our own”), obedience and chastity.

“For the young people, the habit is a sign of belonging, of being part of something bigger than themselves,” Father Larry said.

While they may be responsible for vocation ministry, Father Larry and Father Luis know who is really drawing people to the community.

“Today most young men approach us because of their love for Francis. Francis continues to have universal appeal,” Father Larry said. “Francis is the vocation director today.”

Father Ric Schneider, OFM, pastor of St. Mary in Bloomington, said Francis is attractive because he was a simple man living the Gospel.

“He was so connected to nature and people,” the longtime Friar said. “I think Franciscans have a charism of being friendly and welcoming, and our parishes have always been welcoming parishes.”