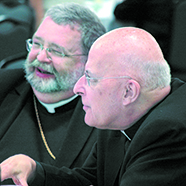 Photo Caption: In this file photo, Cardinal Francis E. George is shown with Bishop Daniel R. Jenky, CSC, prior to addressing priests of the Diocese of Peoria during their assembly days in 2009.

Bishop Daniel R. Jenky, CSC, this week remembered Cardinal Francis E. George as “a deeply holy man, a man of intense prayer” and “a real intellectual who articulated the truths of our faith fearlessly.”

“I had enormous respect for him,” said Bishop Jenky.

Speaking with The Catholic Post after the diocesan men’s march on Saturday, Bishop Jenky noted he was named an auxiliary bishop in the Diocese of Fort Wayne-South Bend in 1997, the same year Cardinal George was named archbishop of Chicago. The two met frequently over the next 18 years, especially after Bishop Jenky was named to head the Peoria diocese in 2002.

As archbishop of Chicago, Cardinal George headed the Illinois Province, comprised of all Illinois dioceses.

In 2003, Bishop Jenky presented Cardinal George with the Archbishop John Lancaster Spalding Medal, the highest honor bestowed by the Diocese of Peoria, and praised the cardinal’s “exemplary service to the church.”

“Each day you are a witness to the power and the paradox of our suffering Servant,” Bishop Jenky told Cardinal George.

“His time in Chicago was not an easy time to be the archbishop of Chicago,” said Bishop Jenky this week. “He never put up a white flag as far as I remember.”

Cardinal George retained a pastor’s heart while leading the third largest archdiocese’s in the U.S. , as illustrated by a time several years ago when Bishop Jenky rode with him from a meeting near Chicago’s O’Hare International Airport to the cardinal’s residence downtown.

“This was after his first round of cancer treatments,” recalled Bishop Jenky. “On that whole trip he was calling up other cancer victims in Chicago that he’d come to know. He’d ask ‘How are you doing?’ and tell them ‘I’m praying for you’ and ‘I’ll remember you at Mass.'”

Bishop Jenky will attend the funeral Mass for Cardinal George this Thursday in Chicago.

Related editorial: “Listen to Cardinal George,” recalls his visits to the Diocese of Peoria.